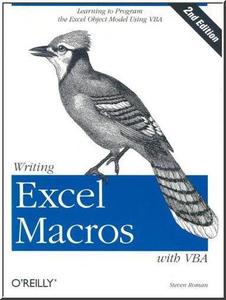 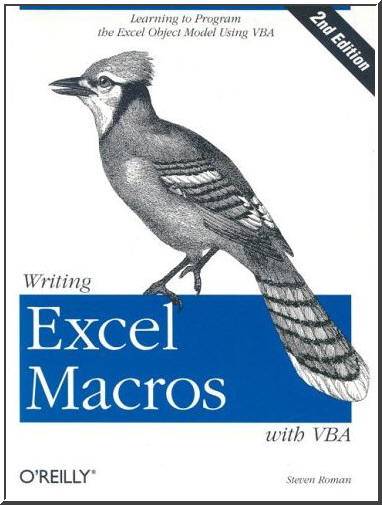 Writing Excel Macros with VBA, 2nd Edition by Steven Roman
Publisher: O'Reilly Media; 2nd edition (June 15, 2002) | ISBN-10: 0596003595 | PDF | 5,7 Mb | 560 pages
Newly updated for Excel 2002, Writing Excel Macros with VBA, 2nd Edition provides Excel power-users, as well as programmers who are unfamiliar with the Excel object model, with a solid introduction to writing Visual Basic for Applications (VBA) macros and programs for Excel. In particular, the book focuses on:
The Visual Basic Editor and the Excel VBA programming environment. Excel features a complete, state-of-the-art integrated development environment for writing, running, testing, and debugging VBA macros. The VBA programming language, the same programming language used by the other applications in Microsoft Office XP and 2000, as well as by the retail editions of Visual Basic 6.0. The Excel object model, including new objects and new members of existing objects in Excel 2002. Excel exposes nearly all of its functionality through its object model, which is the means by which Excel can be controlled programmatically using VBA. While the Excel object model, with 192 objects, is the second largest among the Office applications, you need to be familiar with only a handful of objects to write effective macros. Writing Excel Macros focuses on these essential objects, but includes a discussion of many more objects as well. Writing Excel Macros with VBA, 2nd Edition is written in a terse, no-nonsense manner that is characteristic of Steven Roman's straightforward, practical approach. Instead of a slow-paced tutorial with a lot of handholding, Roman offers the essential information about Excel VBA that you must master to write macros effectively. This tutorial is reinforced by interesting and useful examples that solve common problems you're sure to have encountered. Writing Excel Macros with VBA, 2nd Edition is the book you need to delve into the basics of Excel VBA programming, enabling you to increase your power and productivity.