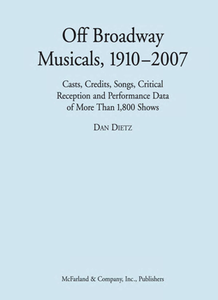 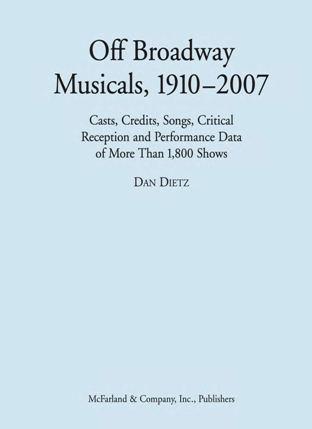 Despite an often unfair reputation as being less popular, less successful, or less refined than their bona-fide Broadway counterparts, Off Broadway musicals deserve their share of critical acclaim and study. A number of shows originally staged Off Broadway have gone on to their own successful Broadway runs, from the ever-popular A Chorus Line and Rent to more off-beat productions like Avenue Q and Little Shop of Horrors. And while it remains to be seen if other popular Off Broadway shows like Stomp, Blue Man Group, and Altar Boyz will make it to the larger Broadway theaters, their Off Broadway runs have been enormously successful in their own right.

This book discusses more than 1,800 Off Broadway, Off Off Broadway, showcase, and workshop musical productions. It includes detailed descriptions of Off Broadway musicals that closed in previews or in rehearsal, selected musicals that opened in Brooklyn and in New Jersey, and American operas that opened in New York, along with general overviews of Off Broadway institutions such as the Light Opera of Manhattan. The typical entry includes the name of the host theater or theaters; the opening date and number of performances; the production's cast and creative team; a list of songs; a brief plot synopsis; and general comments and reviews from the New York critics. Besides the individual entries, the book also includes a preface, a bibliography, and 21 appendices including a discography, filmography, a list of published scripts, and lists of musicals categorized by topic and composer.