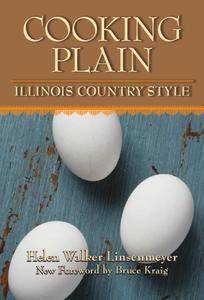 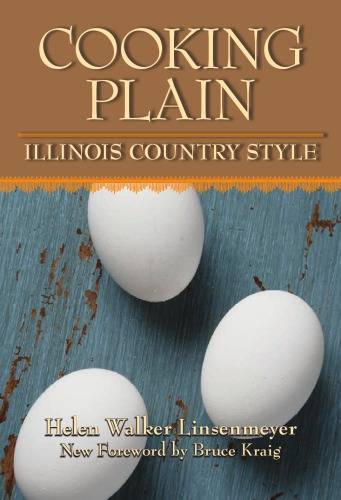 The recipes specify the use of natural ingredients (including butter, lard, and suet) rather than synthetic or ready-mixed foods, which were unavailable in the 1800s. Cooking at the time was pure and unadulterated, and portions were large. Strength-giving food was essential to health and endurance; thus fare was pure, hearty, flavorful, and wholesome.

The many treasures of Cooking Plain, Illinois Country Style include

• basic recipes for mead, originally served to the militiamen of Jackson County; sumac lemonade, made the Indian way; root beer, as it was originally made;

• soups of many kinds—from wholesome vegetable to savory sorrel leaf, enjoyed by the Kaskaskia French;

• over one hundred recipes for wheat breads, sweet breads, corn breads, and pancakes;

• an array of delectable desserts and confections, including puddings, ice cream, taffy, and feathery-light cakes and pies;

• sections on the uses of herbs, spices, roots, and weeds; instructions for making sausage, jerky, and smoked fish and for drying one’s own fruits and vegetables; and household hints on everything from making lye soap to cooking for the sick.

And there are extra-special nuggets, too, for Mrs. Linsenmeyer laces her cookbook with interesting biographical notes on a number of the settlers and the origin of many of the foods they used. There is also a wealth of historical information on lifestyles and cooking before 1900, plus helpful tips on the use of old-fashioned cooking utensils.

A working cookbook complete in its coverage of every area of food preparation, Cooking Plain, Illinois Country Style will be used and treasured as much today as its recipes were by families of an earlier century. The recipes are not gourmet, but they are certain to please today’s cooks, especially those interested in using local ingredients and getting back to a more natural way of cooking and eating.