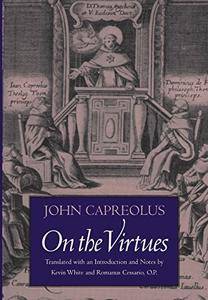 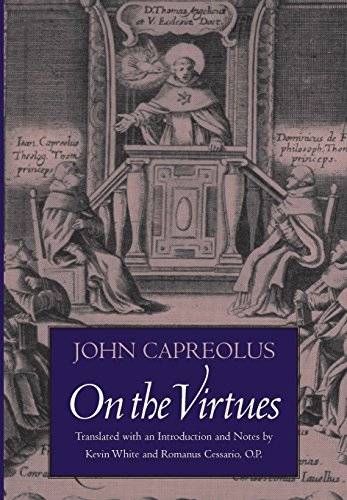 In light of current interest in the thought of St. Thomas Aquinas, rediscovery of the work of John Capreolus (1380-1444) is particularly important. Known to the Renaissance theologians who succeeded him as "prince of Thomists," he established a mode of Thomistic theological and philosophical engagement that has set the pattern for Thomistic thinkers after him. Twentieth-century scholarship on Capreolus tended to focus on questions concerning metaphysics, the person, and the beatific vision. The purpose of the present translation of his questions on the virtues is to bring to the fore another aspect of his thought, his theological ethics.

Capreolus's great work, his Arguments in Defense of the Theology of St. Thomas, constitutes a significant juncture in the history of Western theology. In one respect it is an exercise in the traditional genre of question-commentaries on Peter Lombard's Book of Sentences, a twelfth-century work that had been the official textbook of theology at the University of Paris. In Capreolus's hands, however, the format of the traditional Sentences commentary itself becomes a pretext for accomplishing a purpose more original than that of any preceding commentator on Lombard's work, namely to defend the thought of Aquinas against his late thirteenth- and early fourteenth-century adversaries, including John Duns Scotus, Durandus of St. Pourçain, and Peter Aureole.

The selection from Capreolus's work represented in this translation shows him defending Aquinas's conclusions on faith, hope, charity, the gifts of the Holy Spirit, and the virtues against such adversaries. With a spirit of generosity in quotation, Capreolus lets each adversary have his say, but the outcome of the disputes is never in question, as Capreolus on each point leads the reader towards a view of the superiority of the Thomistic position.

Kevin White is associate professor of philosophy at The Catholic University of America and editor of Hispanic Philosophy in the Age of Discovery. He has edited texts by Aquinas and Peter of Auvergne and has published articles on the thought of Aquinas.
Romanus Cessario, O.P., is professor of systematic theology at St. John's Seminary in Brighton, Massachusetts. In addition to numerous articles and reviews, Cessario has authored, coauthored, or edited several books, including The Moral Virtues and Theological Ethics and Introduction to Moral Theology (forthcoming, CUA Press).

PRAISE FOR THE BOOK:

"This translation is likely to be of value not only to those interested in the history of Thomism, Thomistic moral theory, and medieval texts on ethics, but also to those intrigued by current debates about freedom and obligation in virtue ethics."―Joseph Koterski, S.J., International Philosophical Quarterly

"[This book] will be welcomed by all who are interested in the current renewal of virtue-based morality. The translators have succeeded admirably in putting Capreolus's text into accurate and readable English."―Michael J. Dodds, O.P., Theological Studies

"At a time of increasing interest in virtues in general, and in St. Thomas' treatment of virtues in particular, this book is an invitation to deep and substantive reflection on the reality of the virtues in the moral and spiritual life. . . . White and Cessario have translated Capreolus into fine and lucid English. They have not compromised the precision and consistency of the original and have nonetheless produced a fine work in English. Capreolus has very worthy translators and English-speaking scholars can be grateful indeed. On the Virtues is a work of high scholasticism. . . . For those who have given study to virtue, who have read Aquinas, and would like to think yet more deeply about virtue with precision and distinction, who wish to enter into a longstanding, and ric