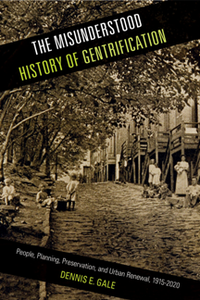 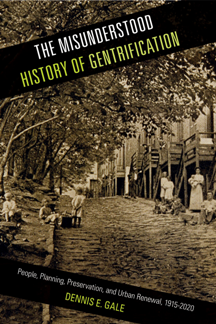 The origins of gentrification date back to World War I—only it was sometimes known as “remodeling” then. Dennis Gale's insightful book, The Misunderstood History of Gentrification, provides a recontextualization of American gentrification, planning, and policymaking. He argues that gentrification must be understood as an urban phenomenon with historical roots in the very early twentieth century.

Gale uses solid empirical evidence to trace the embryonic revitalization of Georgetown, Greenwich Village, Beacon Hill, and elsewhere back to 1915. He shows how reinvestment and restoration reversed urban decline and revitalized neighborhoods. The Misunderstood History of Gentrification also explains how federal policies such as the Urban Redevelopment Program (later named Urban Renewal), which first emerged in 1949, razed urban slums and created an “urban crisis” that persisted in the 1960s and ‘70s. This situation soon prompted city gentrifiers and historic preservationists to reuse and rehabilitate existing structures.

Within a more expansive historical framework, Gale offers a fresh perspective on and debunks misperceptions about gentrification in America.