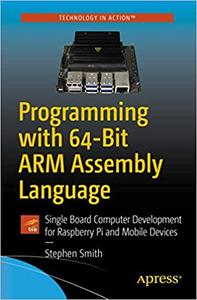 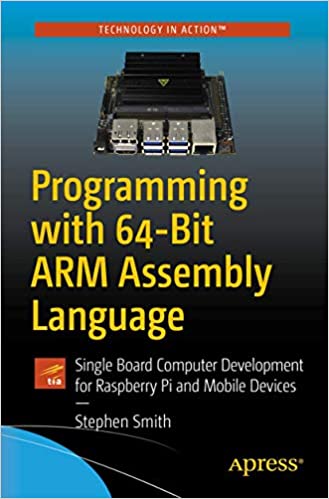 Stephen Smith, "Programming with 64-Bit ARM Assembly Language: Single Board Computer Development for Raspberry Pi and Mobile Devices"
English | ISBN: 1484258800 | 2020 | 453 pages | EPUB, PDF | 2 MB + 5 MB
Mastering ARM hardware architecture opens a world of programming for nearly all phones and tablets including the iPhone/iPad and most Android phones. It’s also the heart of many single board computers like the Raspberry Pi. Gain the skills required to dive into the fundamentals of the ARM hardware architecture with this book and start your own projects while you develop a working knowledge of assembly language for the ARM 64-bit processor.
You`ll review assembly language programming for the ARM Processor in 64-bit mode and write programs for a number of single board computers, including the Nvidia Jetson Nano and the Raspberry Pi (running 64-bit Linux). The book also discusses how to target assembly language programs for Apple iPhones and iPads along with 64-Bit ARM based Android phones and tablets. It covers all the tools you require, the basics of the ARM hardware architecture, all the groups of ARM 64-Bit Assembly instructions, and how data is stored in the computer’s memory. In addition, interface apps to hardware such as the Raspberry Pi’s GPIO ports. The book covers code optimization, as well as how to inter-operate with C and Python code. Readers will develop enough background to use the official ARM reference documentation for their own projects.
With Programming with 64-Bit ARM Assembly Language as your guide you’ll study how to read, reverse engineer and hack machine code, then be able to apply these new skills to study code examples and take control of both your ARM devices’ hardware and software.

What You`ll Learn
Make operating system calls from assembly language and include other software libraries in your projects
Interface apps to hardware devices such as the Raspberry Pi GPIO ports
Reverse engineer and hack code
Use the official ARM reference documentation for your own projects
Who This Book Is For
Software developers who have already learned to program in a higher-level language like Python, Java, C#, or even C and now wish to learn Assembly programming.