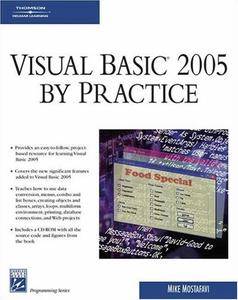 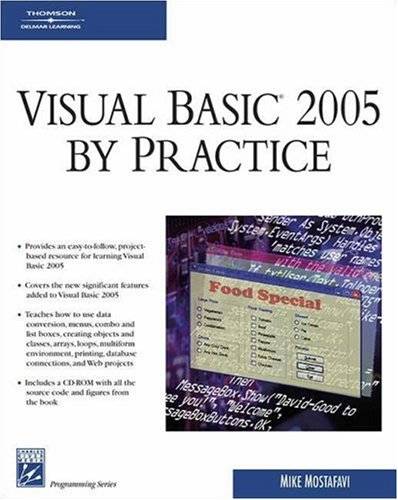 Mike Mostafavi, "Visual Basic 2005 By Practice"
2007 | pages: 528 | ISBN: 1584504412 | PDF | 6,1 mb
Learning an object oriented programming language like Visual Basic can be a challenging and often frustrating task. Many Visual Basic books are intimidating for the beginning programmer because they are mostly theory, making the material difficult to apply. Visual Basic 2005 by Practice cuts through the jargon and provides a better understanding of the language by teaching concepts through step-by-step, clear, and concise examples. These examples provide an easy-to-follow and simple approach to learning the concepts and tools involved with Visual Basic 2005, including the new language features and controls needed to complete beginning and intermediate projects. The examples cover a vast array of language features, including flow charts, radio buttons, detailed message boxes, loading images dynamically, calculations, constants, variables, image lists, creating sub procedures, printing, adding forms to a project, data grids, and string functions. The book also covers important topics such as interactive programming, database features, debugging, and Web controls. The source code for all the examples in the book is provided on the companion CD-ROM, which allows you to see the programs in action and examine their features. The book is written for entry- and intermediate-level Visual basic programmers as well as those experienced with other programming languages, such as those experienced with other programming languages, such as C++, Java and BASIC, and the .NET Framework - Visual Basic's development environment - is explained to the degree needed to learn programming. The user-friendly style, sequence of topical coverage, ample examples, and simple approach of this book make it a must-have for any beginning programmer eager to learn Visual Basic 2005.