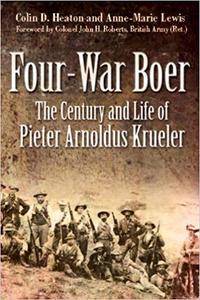 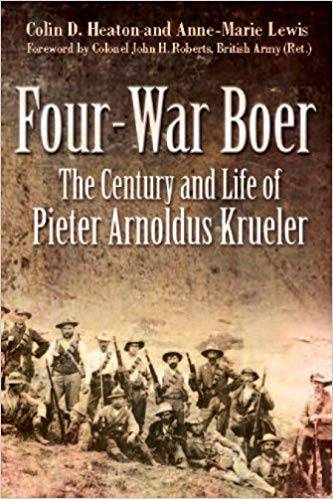 The amazing life of Pieter Krueler (1885-1986) provides a window into a full century of conflict such as one man rarely experiences. Four-War Boer traces Krueler’s highly colorful life from the Second Boer War, where he first served as a 14-year-old scout, through his service in World War I with the German army in East Africa, to the Spanish Civil War to World War II, this time with the Allies, and on into the latter part of the 20th century, when he served as a mercenary during the 1960s Congo Crisis. Later, by this time in his eighties, he became a civilian trainer for the original Selous Scouts of Rhodesia, and later still a trainer for South African commandos.

This biography of a most remarkable man and warrior is based on six years of historical research through hard-to-find secondary and published primary sources as well as extensive interviews with Krueler himself. Interviews with German officers and others who knew and worked with Krueler amply document the biography, adding first-person testimony and giving the work the immediacy of a memoir.

Following the Boer defeat by the British, Krueler sided with the Germans during the East African Campaign. He also operated in the Belgian Congo where he led native African soldiers on extremely dangerous missions. After WWI, Krueler’s distrust of both the rising Fascist and Communist movements in Europe led him to volunteer as a mercenary during the Spanish Civil War, where he worked with the Pyrenees Basque movement. In World War II, he worked as a reserve officer instructor, and later as a coast watcher to guard the coast of South Africa from German incursion.

Krueler later served as a mercenary with Michael Hoare during the 1960s Congo Crisis, before serving South Africa to train commandos. A chapter of this book is devoted to the formation of Rhodesia’s highly elite Selous Scouts, along with highlights of several previously classified missions. This material includes a wealth of fascinating new information, and breaks the great secrecy surrounding Rhodesian and South African special operations, as unveiled through the experience of a man who was a founding father of counterinsurgency in Africa.