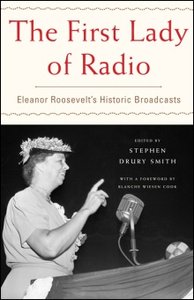 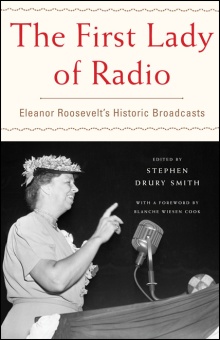 On the afternoon of December 7, 1941, as a stunned nation gathered around the radio to hear the latest about Pearl Harbor, Eleanor Roosevelt was preparing for her weekly Sunday evening national radio program. At 6:45 p.m., listeners to the NBC Blue network heard the First Lady’s calm, measured voice explain that the president was conferring with his top advisors to address the crisis. It was a remarkable broadcast. With America on the verge of war, the nation heard first not from their president, but from his wife.

Eleanor Roosevelt's groundbreaking career as a professional radio broadcaster is almost entirely forgotten. As First Lady, she hosted a series of prime time programs that revolutionized how Americans related to their chief executive and his family. Now, The First Lady of Radio rescues these broadcasts from the archives, presenting a carefully curated sampling of transcripts of Roosevelt's most famous and influential radio shows, edited and set into context by award-winning author and radio producer Stephen Drury Smith. With a foreword by Roosevelt's famed biographer, historian Blanche Wiesen Cook, The First Lady of Radio is both a historical treasure and a fascinating window onto the power and the influence of a pioneering First Lady.