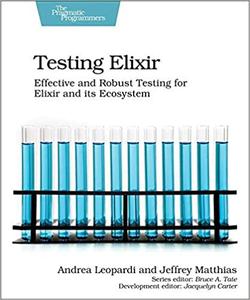 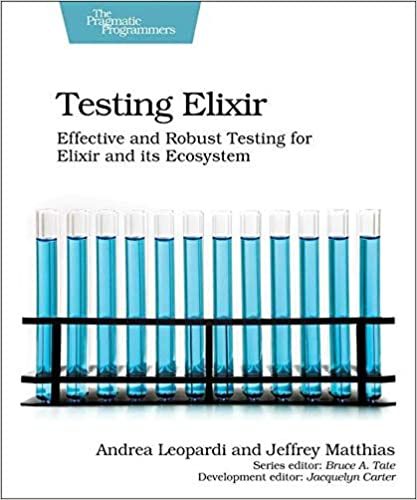 Testing Elixir: Effective and Robust Testing for Elixir and Its Ecosystem
by Andrea Leopardi

English | 2021 | ISBN: 1680507826 | 218 Pages | PDF | 9 MB
Elixir offers new paradigms, and challenges you to test in unconventional ways. Start with ExUnit: almost everything you need to write tests covering all levels of detail, from unit to integration, but only if you know how to use it to the fullest - we'll show you how. Explore testing Elixir-specific challenges such as OTP-based modules, asynchronous code, Ecto-based applications, and Phoenix applications. Explore new tools like Mox for mocks and StreamData for property-based testing. Armed with this knowledge, you can create test suites that add value to your production cycle and guard you from regressions. Write Elixir tests that you can be proud of. Dive into Elixir's test philosophy and gain mastery over the terminology and concepts that underlie good tests. Create and structure a comprehensive ExUnit test suite, starting from the basics, and build comprehensive test coverage that will provide safety for refactoring and confidence that your code performs as designed. Use tests to make your software more reliable and fault tolerant. Explore the basic tool set provided by ExUnit and Mix to write and organize your test suite. Test code built around different OTP functionality. Isolate your code through dependency injection and by using Mox. Write comprehensive tests for Ecto projects, covering Ecto as a database tool as well as a standalone data validation tool. Test Phoenix channels from end to end, including authentication and joining topics. Write Phoenix controller tests and understand the concepts of integration testing in Elixir. Learn property-based testing with StreamData from the author who wrote the library. Code with high confidence that you are getting the most out of your test suite, with the right tools that make testing your code a pleasure and a valuable part of your development cycle. What You Need: To get the most out of this book, you will need to have installed Elixir 1.8 or later and Erlang/OTP 21 or later. In order to complete the relevant chapters, you will also need Ecto 3.1 or later, EctoSQL 3.1 or later and Phoenix 1.3 or later.

If You Find Any Dead LInk Please Send Me PVT MSG
Support My Blog Thanks & Enjoy!