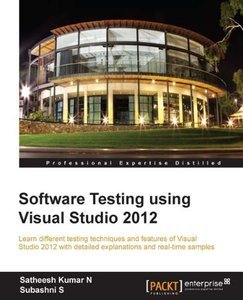 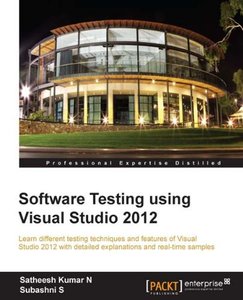 S Subashni and N Satheesh Kumar, "Software Testing using Visual Studio 2012"
English | ISBN: 1849689547 | 2013 | 423 pages | PDF, EPUB | 59 MB
Testing is one of the main phases in the software development lifecycle. Managing the test scenarios, test cases, defects, and linking each one of these is bit of a challenge without using any tools. For frequently changing businesses, it is essential to address testing requirements by matching the pace of the business. This can only be achieved through automation of the possible testing scenarios to reduce the turnaround time of testing.

Software Testing Using Visual Studio 2012 is a practical, hands-on guide that provides a number of clear, step-by-step exercises, which will help you to take advantage of the new features and real power of Visual Studio 2012.

Software Testing Using Visual Studio 2012 also covers the recording of user actions and creating automated tests out of it. This book covers generating and adding parameters to the recording and replacing it at runtime, adding validation and extraction rules to the tests, running the tests using command line commands, looking at the details of test results, and configuring the running the load test out of web performance or unit tests.

This book helps you to understand the complete testing features and how to make use of automation features as well. It will appeal to both developers and testers.
Approach

We will be setting up a sample test scenario, then we'll walk through the features available to deploy tests.
Who this book is for

This book is for developers and testers who want to get to grips with Visual Studio 2012 and Test Manager for all testing activities and managing tests and results in Team Foundation Server. It requires a minimal understanding of testing practices and the software development life cycle; also, some coding skills would help in customizing and updating the code generated from the web UI testing.