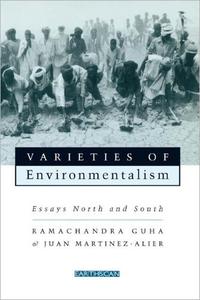 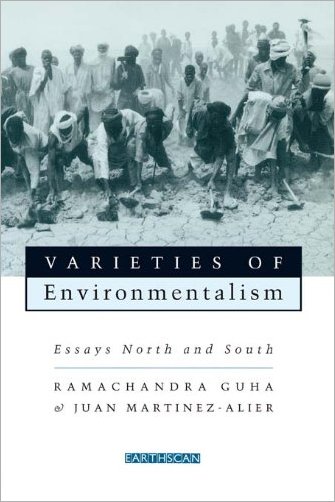 Varieties of Environmentalism: Essays North and South by Ramachandra Guha, Joan Martínez Alier
English | March 3, 1997 | ISBN: 185383324X, 1853833290 | PDF | 256 pages | 14.5 MB
Until very recently, studies of the environmental movement have been heavily biased towards the North Atlantic worlds. There was a common assumption amongst historians and sociologists that concerns over such issues as conservation or biodiversity were the exclusive preserve of the affluent westerner: the ultimate luxury of the consumer society. Citizens of the world's poorest countries, ran the conventional wisdom, had nothing to gain from environmental concerns; they were 'too poor to be green', and were attending to the more urgent business of survival. Yet strong environmental movements have sprung up over recent decades in some of the poorest countries in Asia and Latin America, albeit with origins and forms of expression quite distinct from their western counterparts.

In Varieties of Environmentalism, Guha and Matinez-Alier seek to articulate the values and orientation of the environmentalism of the poor, and to explore the conflicting priorities of South and North that were so dramatically highlighted at the Rio Earth Summit in 1992. Essays on the 'ecology of affluence' are also included, placing ion context such uniquely western phenomena as the 'cult of wilderness' and the environmental justice movement. Using a combination of archival and field data.

The book presents analyses of environmental conflicts and ideologies in four continents: North and South America, Asia and Europe. The authors present the nature and history of environmental movements in quite a new light, one which clarifies the issues and the processes behind them. They also provide reappraisals for three seminal figures, Gandhi, Georgescu-Roegen and Mumford, whose legacy may yet contribute to a greater cross-cultural understanding within the environmental movements.