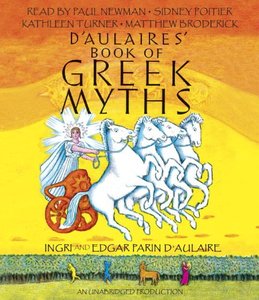 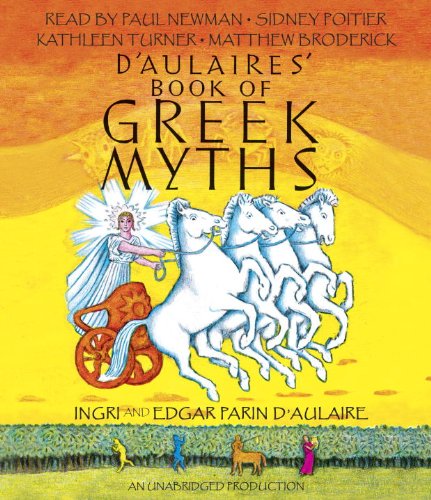 D'Aulaires' Book of Greek Myths by Ingri d'Aulaire, Edgar Parin d'Aulaire
Publisher: Listening Library November 13, 2012 | ISBN: 0449014169 | Language English | Audio in MP3 | 121 MB
Here are the immortals of Olympus—the gods and goddesses of ancient Greece—as freshly described as if they were alive today.
Mighty Zues with his fistful of thunderbolts; mischievous little Hermes; grey-eyed Athena, godess of wisdom; Asclepius, the first physician; Orpheus and his beloved Euridice; Helios the sun, crossing the heavens in his fiery chariot. . . these and other equally fabulous figures are featured here with their heroic deeds and petty squabbles illuminated in full dimension.


Editorial Reviews
No education is complete without a large slice of Greek mythology. And there's no better way of meeting that literary quota than with the D'Aulaires' book. All the great gods and goddesses of ancient Greece are depicted in this big, beautiful classic, lovingly illustrated and skillfully told. Young readers will be dazzled by mighty Zeus, lord of the universe; stirred by elegant Athena, goddess of wisdom; intimidated by powerful Hera, queen of Olympus; and chilled by moody Poseidon, ruler of the sea. These often impetuous immortals flounce and frolic, get indiscreet, and get even. From petty squabbles to heroic deeds, their actions cover the range of godly–and mortal–personalities.

The D'Aulaires' illustrations have a memorable quality: once pored over, they will never leave the minds of the viewer. Decades later, the name Gaea will still evoke the soft green picture of lovely Mother Earth, her body hills and valleys and her eyes blue lakes reflecting the stars of her husband, Uranus the sky. No child is too young to appreciate the myths that have built the foundation for much of the world's art and literature over the centuries. This introduction to mythology is a treasure. (Ages 10 to adult) –Emilie Coulter –This text refers to the Hardcover edition.
Review
"For any child fortunate enough to have this generous book…the kings and heroes of ancient legend will remain forever matter-of-fact; the pictures interpret the text literally and are full of detail and witty observation."
–Horn Book.