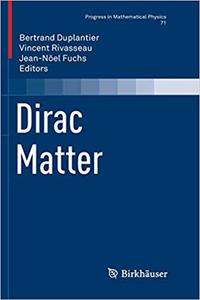 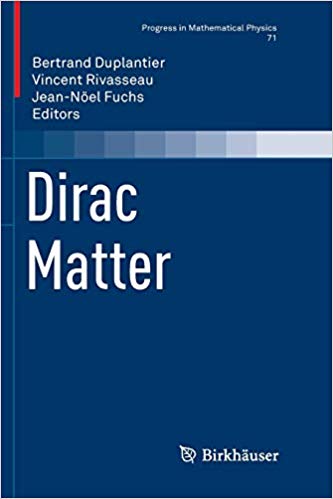 Bertrand Duplantier, Vincent Rivasseau, Jean-Nöel Fuchs, "Dirac Matter"
English | 2017 | ISBN: 3319325353 | PDF | pages: 139 | 13.0 mb
This fifteenth volume of the Poincare Seminar Series, Dirac Matter, describes the surprising resurgence, as a low-energy effective theory of conducting electrons in many condensed matter systems, including graphene and topological insulators, of the famous equation originally invented by P.A.M. Dirac for relativistic quantum
mechanics. In five highly pedagogical articles, as befits their origin in lectures to a broad scientific audience, this book explains why Dirac matters. Highlights include the detailed "Graphene and Relativistic Quantum Physics", written by the experimental pioneer, Philip Kim, and devoted to graphene, a form
of carbon crystallized in a two-dimensional hexagonal lattice, from its discovery in 2004-2005 by the future Nobel prize winners Kostya Novoselov and Andre Geim to the so-called relativistic quantum Hall effect; the review entitled "Dirac Fermions in Condensed Matter and Beyond", written by two prominent theoreticians, Mark Goerbig and Gilles Montambaux, who consider many other materials than graphene, collectively known as "Dirac matter", and offer a thorough description of the merging transition of Dirac cones that occurs in the energy spectrum, in various experiments involving stretching of the microscopic hexagonal lattice; the third contribution, entitled "Quantum Transport in Graphene: Impurity Scattering as a Probe of the Dirac
Spectrum", given by Hélène Bouchiat, a leading experimentalist in mesoscopic physics, with Sophie Guéron and Chuan Li, shows how measuring electrical transport, in particular magneto-transport in real graphene devices - contaminated by impurities and hence exhibiting a diffusive regime  - allows one to deeply probe the Dirac nature of electrons. The last two contributions focus on topological insulators; in the authoritative "Experimental Signatures of Topological Insulators", Laurent Lévy reviews recent experimental progress in the physics of mercury-telluride samples under strain, which demonstrates that the surface of a three-dimensional topological insulator hosts a two-dimensional massless Dirac metal; the illuminating final contribution by David Carpentier, entitled "Topology of Bands in Solids: From Insulators to Dirac Matter", provides a geometric description of Bloch wave functions in terms of Berry phases and parallel transport, and of their topological classification in terms of invariants such as Chern numbers, and ends with a perspective on three-dimensional semi-metals as described by the Weyl equation. This book will be of broad general interest to physicists, mathematicians, and historians of science.