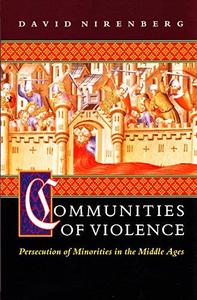 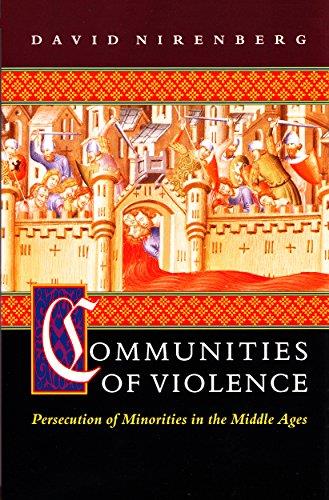 How does it affect our understanding of violence when we assume "the killers had motives, that their actions had meaning, and that this meaning is decipherable from context (43)?" In Communities of Violence, Nirenberg explores this question in an attempt to transcend the teleological and contextualize medieval violence against minorities. He argues that the dominant voices in the discourse have been those seeking to trace modern hostilities to a fixed point of entry into western thought; this book seeks to expand the debate and pronounces that the focus on the longue durée imposes modern ideologies upon medieval society. Rather than seeking to grasp the complexities of the medieval mindset, it precludes the "psyche of Everyman (5)"* from exercising any rationality or nuance. Nirenberg endeavors to remodel this reduction, allowing us a fresh perspective of the "Everyman," particularly the treatment of minorities within his midst.Communities is not an exhaustive study of the "persecution of minorities in the Middle Ages" considering it exclusively addresses Jews, Muslims, and lepers in Southern France and the Crown of Aragon during the first half of the fourteenth-century; thus the subtitle is slightly deceiving. However, this can be overlooked due to the work's valuable contribution. Despite its limited scope, Communities convincingly informs the reader of the functionality and systemic nature of persecution in medieval society as well as the need to question the long assumed marginality of these minorities. Nirenberg utilizes several outbreaks of violence to demonstrate the inexistence of a universal modus operandi regarding minorities, beginning by examining the "Shepherds' Crusade" of 1320. Eventually crossing the Pyrenees, the Crusade originated in France and reportedly was instigated through the vision of a young boy. Though it initially targeted Muslims, it quickly and savagely encompassed Jews also. Nirenberg's sources for the attacks in France come from chronicles while sources for the events in Aragon are primarily royal and fiscal documents, but the differences in sources are not the author's focus. Instead, Nirenberg reveals disparate regional goals resulting in contrasting responses. In France, he concludes that the persecution occurred in "context of...relations between monarchy and Jews," of which the shepherds were well aware (49). Meanwhile in Aragon, King James II was informed of the encroaching "pastoureaux" and issued orders to "bar them entry." He then sent out communiqués "to nearly every town in the Crown of Aragon with a Jewish or a Muslim population" commanding protection for the Jews (71). Both regions were majority Christian and ruled by Christian kings, begging the question which Nirenberg deftly answers: why such divergent reactions? He concludes that these events, though under the banner of "Shepherds' Crusade," must be viewed individually - taking into account local sentiments, politics, and relations. Thus, the Crusade of 1320, and the "Cowherds' Crusade" of 1321 directed at lepers, must be analyzed within their individual contexts rather than placed on a linear trajectory to the Nazi's Die Endlösung and the Shoah over seven hundred years later. Communities not only exposes the prevalent teleological bent most have displayed in the analyses of minority persecution during international incidents, but it also demonstrates it through inter and intra-communal violence. Here is where Nirenberg is at his most controversial. The major example employed is that of the recurrent Holy Week riots. A common, and equally persuasive, explanation for the annual attacks on Jews is the scurrilous title of "Christ-Killers (201)." The accusations of deicide, coupled with the popular spirituality based in Jesus' human suffering and the Easter season, produced a "violent ritual paradigm (201)" and has long marked "a transition from tolerance to intolerance (200)." However, Nirenberg seizes upon this idea of ritual and argues the so-called violence - which he says largely entailed young men hurling rocks at the walls of Jewish settlements, rarely resulting in serious injury - actually served a number of important functions in the community. These functions included: solidifying social boundaries, stabilizing relations, and concurrently acting as exclusive and inclusive by conferring an official - and necessary - position as outsider upon the victims. Some might view Nirenberg's legitimation of violence towards minorities as pernicious at best and diabolical at worst. However, a careful reader will note Nirenberg's sensitivity to the subject at hand. Communities realizes the precariousness of its position and carefully, yet unapologetically, recovers the proper underpinning of the discussion. Nirenberg does not excuse the violence but impartially pinpoints the contemporary rationalization and systematic methods of medieval persecution. Thus, rather than diminish a teleological approach, Communities enables us to move beyond the excuse of an irrational mob-mentality and perhaps gain insight into specific antecedents of communal violence. Persecutions become even more frightening but possibly more predictable if "the killers had motives" and "their actions had meaning." This makes Communities of Violence an indispensable addition to this field of study.*Nirenberg is arguing against the idea of an irrational and anxious population found in Carlo Ginzburg, Ecstasies: Deciphering the Witches' Sabbath, trans. Raymond Rosenthal (New York: Pantheon, 1991).