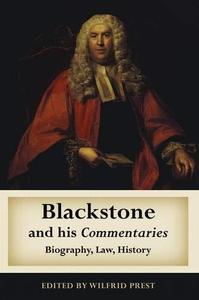 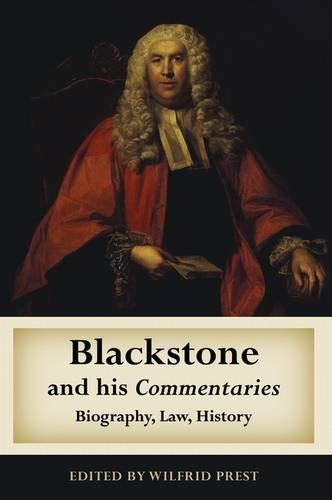 One of the most celebrated works in the Anglo-American legal tradition, William Blackstone's Commentaries on the Laws of England (1765-9) has recently begun to attract renewed interest from legal and other scholars. The Commentaries no longer dominate legal education as they once did, especially in North America during the century after their first publication. But they continue to be regularly cited in the judgments of superior courts of review on both sides of the Atlantic, and elsewhere throughout the common-law world. They also provide constitutional, cultural, intellectual and legal historians with a remarkably comprehensive account of the role of law, lawyers and the courts in the imperial superpower that was England on the cusp of the industrial revolution. The life and character of Blackstone himself, the nature and sources of his jurisprudence as expounded in the Commentaries, and the impact of his great book, both within and beyond his native shores, are the main themes of this collection. Individual essays treat Blackstone's early architectural treatises and their relationship to the Commentaries; his idiosyncratic book collecting; his views of the role of judges, interpretation of statutes, the law of marriage, the status of wives, natural law, property law and the legalities of colonisation, and the varied reception of the Commentaries in America and continental Europe. Blackstone's bibliography and iconography also receive attention. Combining the work of both eminent and emerging scholars, this interdisciplinary venture sheds welcome new light on a legal classic and its continued influence. Contents Part I Life 1 Blackstone and Biography - Wilfrid Prest 2 A 'Model of the old House': Architecture in Blackstone's Life and Commentaries - Carol Matthews 3 'A Mighty Consumption of Ale': Blackstone, Buckler, and All Souls College, Oxford - Norma Aubertin-Potter 4 William Blackstone and William Prynne: an Unlikely Association? - Ian Doolittle Part II Thought 5 Blackstone on Judging - John H Langbein 6 Some reflections on Blackstone's Rules for the Construction of Statutes - John V Orth 7 Blackstone and Bentham on the Law of Marriage - Mary Sokol 8 Coverture and Unity of Person in Blackstone's Commentaries -Tim Stretton 9 Blackstone's Commentaries on Colonialism: Australian Judicial Interpretations - Thalia Anthony 10 Restoring the 'Real' to Real Property Law: A return to Blackstone? - Nicole Graham Part III Influence 11 American Blackstone - Michael Hoeflich 12 Did Blackstone get the Gallic Shrug? - John Emerson 13 Blackstone in Germany - Horst Dippel Part IV Sources 14 Bibliography - Morris Cohen 15 Iconography - J H Baker and Wilfrid Prest Contributors -Thalia Anthony lectures in law at the University of Sydney. -Norma Aubertin-Potter is Librarian-in-Charge of the Codrington Library, All Souls College, Oxford. -J H Baker, Downing Professor of the Laws of England at the University of Cambridge, is Literary Director of the Selden Society. -Morris Cohen, Professor Emeritus and Professorial Lecturer in Law, is the former Librarian of Yale Law School. -Horst Dippel is Professor of British and American Studies at the University of Kassel. -Ian Doolittle, formerly a Junior Research Fellow at Christ Church, Oxford, is a partner in the law firm Trowers and Hamlins LLP in London. -John Emerson holds a Visiting Research Fellowship in the Law School, University of Adelaide. -Nicole Graham is Senior Lecturer in the Faculty of Law, University of Technology, Sydney. -Michael Hoeflich is John H and John M Kane Distinguished Professor in the Law School, University of Kansas. -John Langbein is Sterling Professor of Law and Legal History at Yale Law School. -Carol Matthews teaches in the School of History and Politics at the University of Adelaide. -John V Orth holds the William Rand Kenan Jr Chair of Law at the University of North Carolina, Chapel Hill. -Wilfrid Prest is Professor Emeritus and Visiting Research Fellow in the Law School and School of History and Politics, University of Adelaide. -Mary Sokol holds an Honorary Research Fellowship in the Bentham Project at University College London. -Tim Stretton teaches history at St Mary's University, Halifax, Nova Scotia.