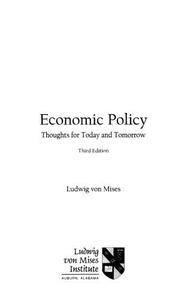 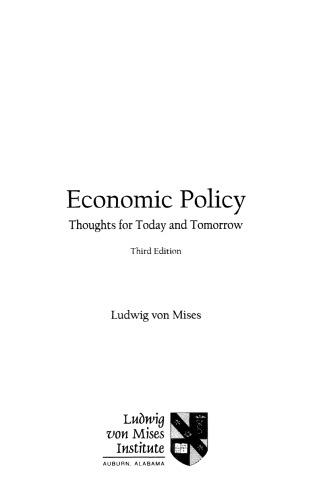 Economic Policy contains six lectures Ludwig von Mises delivered in 1959 for the Centro de Estudios sobre la Libertad in Argentina. This volume serves as an excellent introduction to what Mises sees as the simple truths of history in terms of economic principles. In straightforward language, Mises explains topics such as capitalism, socialism, interventionism, inflation, foreign investment, and economic policies and ideas. Ludwig von Mises (1881–1973) was the leading spokesman of the Austrian School of Economics throughout most of the twentieth century. He earned his doctorate in law and economics from the University of Vienna in 1906. In 1926, Mises founded the Austrian Institute for Business Cycle Research. From 1909 to 1934, he was an economist for the Vienna Chamber of Commerce. Before the Anschluss, in 1934 Mises left for Geneva, where he was a professor at the Graduate Institute of International Studies until 1940, when he emigrated to New York City. From 1948 to 1969, he was a visiting professor at New York University. Bettina Bien Greaves is a former resident scholar, trustee, and longtime staff member of the Foundation for Economic Education. She has written and lectured extensively on topics of free market economics. Her articles have appeared in such journals as Human Events, Reason, and The Freeman: Ideas on Liberty. A student of Mises, Greaves has become an expert on his work in particular and that of the Austrian School of economics in general. She has translated several Mises monographs, compiled an annotated bibliography of his work, and edited collections of papers by Mises and other members of the Austrian School. [C:\Users\Microsoft\Documents\Calibre Library]