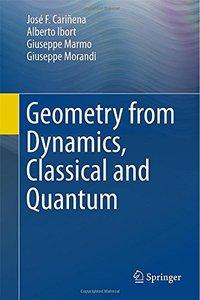 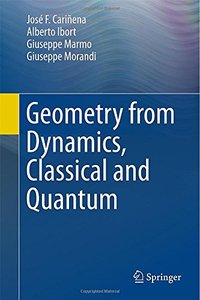 It is assumed that what can be accessed in actual experiences when studying a given system is just its dynamical behavior that is described by using a family of variables ("observables" of the system). The book departs from the principle that ''dynamics is first'' and then tries to answer in what sense the sole dynamics determines the geometrical structures that have proved so useful to describe the dynamics in so many important instances. In this vein it is shown that most of the geometrical structures that are used in the standard presentations of classical dynamics (Jacobi, Poisson, symplectic, Hamiltonian, Lagrangian) are determined, though in general not uniquely, by the dynamics alone. The same program is accomplished for the geometrical structures relevant to describe quantum dynamics. Finally, it is shown that further properties that allow the explicit description of the dynamics of certain dynamical systems, like integrability and super integrability, are deeply related to the previous development and will be covered in the last part of the book.

The mathematical framework used to present the previous program is kept to an elementary level throughout the text, indicating where more advanced notions will be needed to proceed further. A family of relevant examples is discussed at length and the necessary ideas from geometry are elaborated along the text. However no effort is made to present an ''all-inclusive'' introduction to differential geometry as many other books already exist on the market doing exactly that. However, the development of the previous program, considered as the posing and solution of a generalized inverse problem for geometry, leads to new ways of thinking and relating some of the most conspicuous geometrical structures appearing in Mathematical and Theoretical Physics.