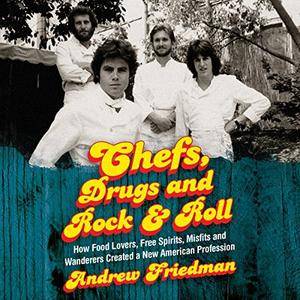 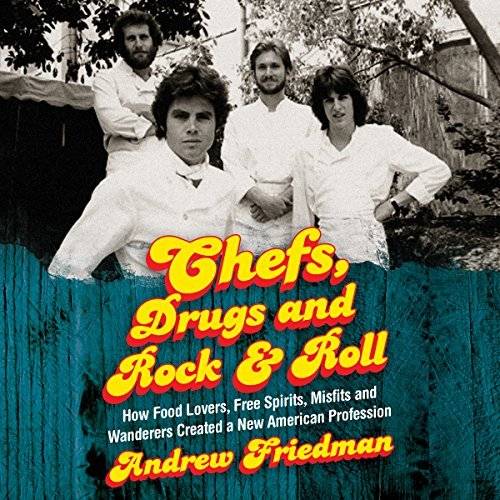 Chefs, Drugs and Rock & Roll transports listeners back in time to witness the remarkable evolution of the American restaurant chef in the 1970s and 1980s.

Andrew Friedman goes inside Chez Panisse and other Bay Area restaurants to show how the politically charged backdrop of Berkeley helped spark this new profession; into the historically underrated community of Los Angeles chefs, including a young Wolfgang Puck; and into the clash of cultures between established French chefs in New York City and the American game changers behind the Quilted Giraffe, River Café, and other storied establishments.

Along the way, the chefs, their struggles, their cliques, and, of course, their restaurants are brought to life in vivid, memorable detail. As the '80s unspool, we watch the profession evolve as American masters like Thomas Keller rise, and watch the genesis of a "chef nation" as chefs start crisscrossing the country for work and special events and legendary hangouts like Blue Ribbon become social focal points, all as the industry-altering Food Network shimmers on the horizon.

A (mostly) oral history told primarily in the words of the people who lived it - from writers like Ruth Reichl to chefs like Jeremiah Tower and Jonathan Waxman - Chefs, Drugs and Rock & Roll treats listeners to an unparalleled 360-degree re-creation of the industry and the times through the perspectives not only of the pioneering chefs but also of line cooks, front-of-house personnel, investors, and critics who had front-row seats to this extraordinary transformation.