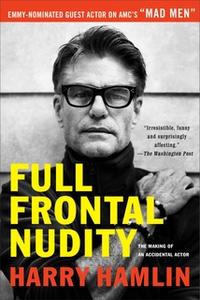 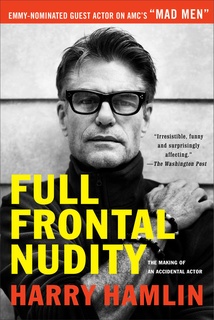 IN 2008, as he attempted to enter Canada to film a television series, Harry Hamlin—the former star of L.A. Law and once People magazine’s Sexiest Man Alive—was detained at the border for unresolved narcotics convictions. And so begins Full Frontal Nudity, a laugh-out-loud-funny memoir in which Harry digs deep into his past to recount the wacky experiences of his childhood, the twisted path that led to his alleged criminal behavior, and the series of fortuitous mishaps that drove him to become an actor.

Harry was reared in suburban California in the late 1950s by a gin-gulping, pill-popping housewife mother and a rocket scientist father with a secret life. On its surface, his childhood was not unlike his peers’, except that he was kicked out of the fourth grade for writing a book report on Mein Kampf and, when he was eleven, his parents gave him a subscription to Playboy for Christmas. Curious by nature, chock-full of boyish charm and good looks, Harry experimented with mystical religion and set off for Woodstock, only to narrowly avoid lighting the whole of Yellowstone National Park on fire. At eighteen, he was ready to matriculate at Berkeley and become the architect he always wanted to be. But fate—this time in the form of a large Hells Angel, a few purple microdots, and an evening in the tree houses of La Honda—got in the way.

Sharp and bawdy, Full Frontal Nudity spans the years from Harry’s childhood through his time at Berkeley (which he was asked to leave after he was accused of running a brothel), to Yale, then on an extended vacation in the Yucatán, and finally to the American Conservatory Theater, where Harry played his first lead role—as the buck-naked star of Equus.

Full Frontal Nudity is an uproarious memoir that captures an era and describes the unlikely origins of a star.