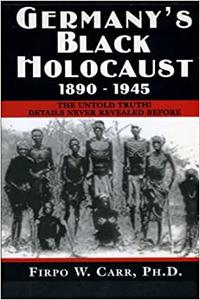 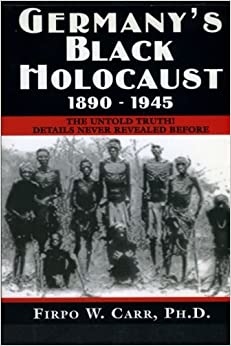 Germany's Black Holocaust: 1890-1945: Details Never Before Revealed! by Firpo Carr
English | June 5, 2012 | ISBN: 1477599185 | 296 pages | EPUB | 2.90 Mb
In the 1890s Blacks were tortured in German concentration camps in Southwest Africa (now called Namibia) when Adolph Hitler was only a child. Colonial German doctors conducted unspeakable medical experiments on these emaciated helpless Africans decades before such atrocities were ever visited upon the Jews. Thousands of Africans were massacred. Regrettably, historians neglected to properly register the slaughter—that is, to lift it from the footnote in history that it had been relegated to—until now. In an attempt to give the incidents their rightful recognition in the historical context of the Holocaust, Dr. Firpo W. Carr has authored a new book entitled, Germany’s Black Holocaust: 1890–1945. In it, he reveals the startling hidden history of Black victims of the Holocaust. The mayhem and carnage date back to the turn of the 20th century, many years before there were ever any other unfortunate victims—Jew or Gentile—of the Holocaust. Carr conducted three incredibly revealing interviews with: (1) a Black female Holocaust victim; (2) the Black commanding officer who liberated 8,000 Black men from a concentration camp; and (3) an African American medic from the all-Black medical unit that was responsible for retrieving thousands of dead bodies from Dachau. (White medical units were spared the gruesome task.) "Kay," the Black female Holocaust survivor, laments: "You cannot possibly comprehend the anger I have in me because of being experimented on in Dachau, and being called ‘nigger girl’ and ‘blacky’ while growing up." Testimonials from the Black commanding officer and African American medic are memorialized, for the first time ever, in Carr’s book. The research is based on voluminous documentation, and more. If you are like most people, you simply have never heard the unbelievable story of Black victims of the Holocaust. You are invited to read about the human spirit's triumph over events that occurred during this horrible piece of hidden history.