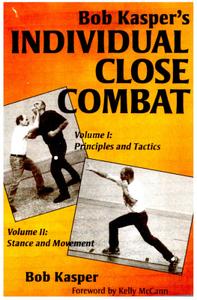 Bob Kasper's Individual Close Combat Volumes 1 & 2
Paladin Press | 2008 | ISBN: 1581606850 | English | 71 pages | PDF | 2.33 MB
After World War II, training in hand-to-hand combat stopped abruptly, as interest in the Eastern martial arts blossomed. Convinced that these close-quarter techniques, which had been forged in the streets of Shanghai, China, and tempered in the Pacific and European theaters of war, represented the true essence of close combat, and concerned that these skills would be lost forever, a handful of men decided to preserve this knowledge. One of these men was Bob Kasper.
A student of the late Charles Nelson, Bob Kasper wrote these two volumes of individual close-combat techniques for his students but never published them. The first volume is on principles and tactics while the second volume concentrates on stance and movement. By offering these two volumes to the public for the very first time, Paladin is not only helping to preserve the techniques designed and battle-field tested by World War II combatives pioneers - a task that Kasper dedicated much of his life to - it is also preserving the work of another close-combat legend, Bob Kasper.