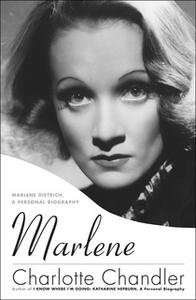 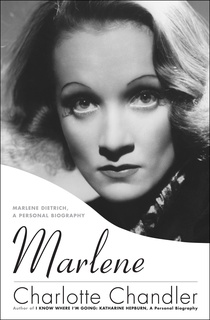 In Marlene, the legendary Hollywood icon is vividly brought to life, based on a series of conversations with the star herself and with others who knew her well. In the mid-1970s Charlotte Chandler spoke with Marlene Dietrich in Dietrich’s Paris apartment. The star’s career was all but over, but she agreed to meet because Chandler hadn’t known Dietrich earlier, “when I was young and very beautiful.” Dietrich may have been retired, but her appearance and her celebrity—her famous mystique—were as important to her as ever.

Marlene Dietrich’s life is one of the most fabulous in Hollywood history. She began her career in her native Berlin as a model, then a stage and screen actress during the silent era, becoming a star with the international success The Blue Angel. Then, under the watchful eye of the director of that film, her mentor Josef von Sternberg, she came to America and became one of the brightest stars in Hollywood. She made a series of acclaimed pictures—Morocco, Shanghai Express, Blonde Venus, Destry Rides Again, among many others—that propelled her to international stardom. With the outbreak of World War II, the fiercely anti-Nazi Dietrich became an American citizen and entertained Allied troops on the front lines. After the war she embarked on a new career as a stage performer, and with her young music director, the gifted Burt Bacharach—whom Chandler interviewed for the book—Dietrich had an outstanding second career.

Dietrich spoke candidly with Chandler about her unconventional private life: although she never divorced her husband, Rudi Sieber, she had numerous well-publicized affairs with his knowledge (and he had a longtime mistress with her approval). By the late 1970s, plagued by accidents, Dietrich had become a virtual recluse in her Paris apartment, communicating with the outside world almost entirely by telephone Marlene Dietrich lived an extraordinary life, and Marlene relies extensively on the star’s own words to reveal how intriguing and fascinating that life really was.