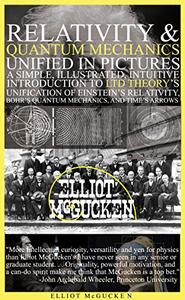 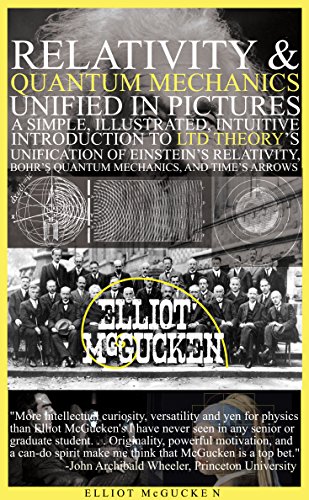 Relativity and Quantum Mechanics Unified in Pictures: A Simple, Intuitive, Illustrated Introduction to LTD Theory's Unification of Einstein's Relativity by Dr. Elliot McGucken
English | February 7, 2017 | ISBN: N/A | ASIN: B01N2BCAWO | 185 pages | EPUB | 7.12 Mb
J.A. Wheeler: More intellectual curiosity, versatility and yen for physics than Elliot McGucken's I have never seen in any senior or graduate student. . . Originality, powerful motivation, and a can-do spirit make me think that McGucken is a top bet . . . I say this on the basis of close contacts with him over the past year and a half. . .(. –J.A. Wheeler, Princeton's Joseph Henry Professor of Physics )

Bernard Baruch: Millions saw the apple fall, but Newton was the one who asked why.

Albert Szent-Gyцrgyi: Genius is seeing what everyone else sees and thinking what no one else has thought.

Early on in the book, a most simple, remarkable, revolutionary drawing is shared. The figure is Sir Isaac Newton’s revolutionary drawing of a cannonball being fired off a mountaintop at the North Pole. The drawing depicts what happens as the cannonball is fired with higher and higher velocities. At first, the cannonball lands fairly close to the cannon. Then, with a higher velocity, it lands farther away upon the earth's curved surface. Ultimately, as Newton’s figure shows, if the cannonball is fired with a great enough velocity, it will orbit the earth and return to point on the mountaintop from whence it began. Via a simple drawing, Newton showed that the same force which draws objects to the earth can also keep objects in orbit. And so it is that Newton’s famous theory and law of universal gravitation was born.

Not only does this book celebrate how simple drawings have ever advanced and revolutionized physics, from Thomas Young's sketch of the double slit experiment to Faraday's sketches of the electric and magnetic fields, but it also exalts a brand new theory–Light Time Dimension Theory–exalting and advancing science by these very same, simple methods rooted in simple, physical pictures and ideas.

Just as Newton revolutionized our understanding of gravity via a remarkably simple physical picture, so did Einstein, writing, “I was sitting in a chair in the patent office at Bern when all of a sudden a thought occurred to me: “If a person falls freely he will not feel his own weight. I was startled. This simple thought made a deep impression on me. It impelled me toward a theory of gravitation.” This simple thought lead to Einstein’s General Theory of Relativity, wherein space and time bend and curve. Unlike string theory, Light Time Dimension Theory acknowledges the fact that dimensions move, and it simply extends the general principle by stipulating that the fourth dimension is expanding at the rate of c relative to the three spatial dimensions.

In the same way Newton was the first to sketch the gravitational orbits of cannonballs and Faraday was the first to sketch electric and magnetic fields and the invisible "lines of force," Dr. E the first to draw the expansion of the fourth dimension. And in doing so, he recognized that x4’s expansion was responsible for the basic characteristics of quantum mechanics, relativity, and the second law of thermodynamics. Via the simple sketch, Dr. E found a doorway to the deeper physical reality underlying and unifying relativity, quantum mechanical behavior, and time’s arrows and asymmetries.

Join us on this epic odyssey through not only the beautiful simplicity of science's greatest revolutionary thoughts and drawings from the likes of Feynman, Einstein, Faraday, Newton, Galileo, and Copernicus, but from Dr. E too.