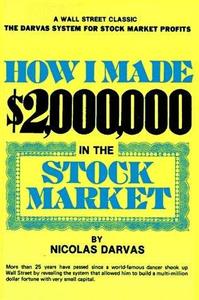 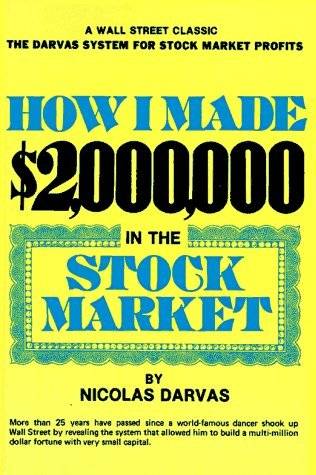 This is the book that stopped me from being terrified of the stock market. The method it uses is so sound and so brilliant that it reduces the risk of loss to an almost negligible level. And despite what some say, it works even in a bear market; in fact, Darvas made most of his money in a period that was historically considered to be a “baby bear” market. The difference is that, during a bull market, Darvas-worthy stocks show up ten times a week. During a bear market, one of these stocks may take six or eight months to show up.
Why do I say it works? I've tried it. The almost shameful secret here is that it's like being an Inside Trader without an inside trader's information. You can still cash in, though. Darvas's system catches stocks that are – in most cases inexplicably and with no accompanying news – suddenly experiencing heavy buying, driving them up powerfully to challenge and break through previous highs.
And why are these stocks doing this? Nobody knows. Why does a pharmaceutical company in business 13 years which has never been able to bring a drug to market, never made a profit, and is predicting worse earnings to come suddenly have people buying it more and more each day, its price running up steadily and strong, with absolutely no news out of the company? Who CARES? In fact, one of Darvass rules was to read absolutely NONE OF THE NEWS about the stock! The Darvas system just spots the stock as it climbs. If it breaks through that previous high, you will buy it along with all these other people you don't know. And when the stock continues to climb…in three weeks, and THEN the company announces it has just released an FDA-approved drug which is the strongest anti-influenza drug to ever hit the market and already has a distribution deal with Johnson & Johnson, you might understand. You might understand that a LOT of people knew something. They just weren't telling. Luckily, you didn't have to be one of them, nor did you have to be to enjoy the further $10-in-one-day jump it experienced the day the news broke. And if you followed Darvas' trailing stop-loss requirement, you automatically sold when it fell back down.
This happened to me, and I've done it DOZENS of more times, though the climbs werent always that dramatic. Usually, you never find out what caused the surge. You just profit from it. Darvas himself likened it to being a silent partner with all those people in the know.
One warning: you either understand what the system is by the way it's explained here, or you don't. To me it was as simple as pie, and with the Internet screening techniques available today (which Darvas didn't have in his early days - further proof of his true genius was his ability to make "mental charts" without looking at physical ones - abstract thinking characteristic of a very high IQ) these stocks can be found if they exist. But more people DON'T grasp the system than do. This is especially clear in the remarkably funny Q&A section at the end of the book where you find that people are entirely missing his concepts and he is almost at a total loss to explain what seems so obvious to him.
This is not day trading. But neither is it long-term buy and hold. I think it hypocritical of Darvas to claim he was a long term investor - he was long term only as LONG as the stock stayed in its "box" or moved up into a new one. If it moved down, he was OUT OF THERE. That's NOT long term investing. It's smart investing. And Nicolas Darvas is my investing hero.
He made all the mistakes that all of us make, and youll chuckle a lot as you watch him plod through all the mistakes youve already made or may be about to make. Then he hits on his system, makes a lot of money, gets very humanly egotistical and even arrogant about it, and almost loses it all as he gives in to overconfidence and the other very human emotions which are an investors worst enemy. Finally he learns to separate emotion out and leave discipline in. It is the only way to make this system work.
Also, dont forget that this is a combination of technical AND fundamental investing  stocks are located by technical signals, but are further analyzed fundamentally (if only to a minimal degree) before being considered as buy candidates.
This book reads like a highly entertaining novel  its hysterical when news of his success leaks out and TIME magazine sends three different sets of editors down to interview him and study his system before they finally decide he is for real and end up printing his story and putting him on the front cover. Which is what eventually lead to the demand for this must-have, must-read classic.