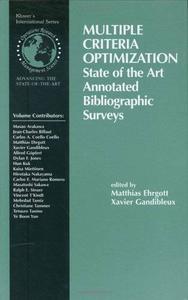 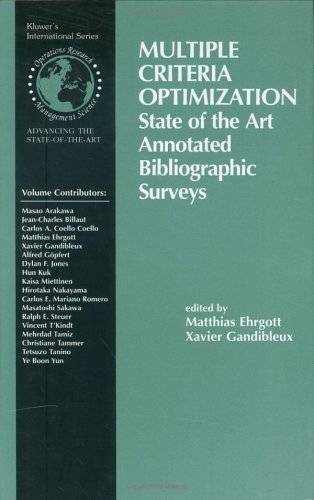 The roots of Multiple Criteria Decision Making and Multiple Criteria Optimization were laid by Pareto at the end of the 19th century, and since then the discipline has prospered and grown, especially during the last three decades. Today, many decision support systems incorporate methods to deal with conflicting objectives. The foundation for such systems is a mathematical theory of optimization under multiple objectives. Since its beginnings, there have been a vast number of books, journal issues, papers and conferences that have brought the field to its present state. Despite this vast body of literature, there is no reliable guide to provide an access to this knowledge. Over the years, many literature surveys and bibliographies have been published. With the ever rapidly increasing rate of publications in the area and the development of subfields, these were mostly devoted to particular aspects of multicriteria optimization: Multiobjective Integer Programming, Multi-objective Combinatorial Optimization, Vector Optimization, Multiobjective Evolutionary Methods, Applications of MCDM, MCDM Software, Goal Programming. Hence the need for a comprehensive overview of the literature in multicriteria optimization that could serve as a state of the art survey and guide to the vast amount of publications. Multiple Criteria Optimization: State of the Art Annotated Bibliographic Surveys is precisely this book. Experts in various areas of multicriteria optimization have contributed to the volume. The chapters in this book roughly follow a thread from most general to more specific. Some of them are about particular types of problems (Theory of Vector Optimization, Nonlinear Multiobjective Programming, Fuzzy Multiobjective Programming, Multiobjective Combinatorial Optimization, Multicriteria Scheduling Problems), while the others are focused on multi-objective methodologies (Goal Programming, Interactive Methods, Evolutionary Algorithms, Data Envelopment Analysis). All contributing authors invested great effort to produce comprehensive overviews and bibliographies and to have references that are as precise as possible.