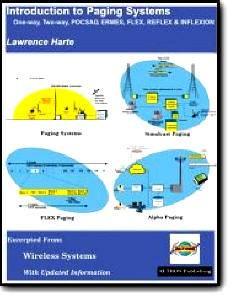 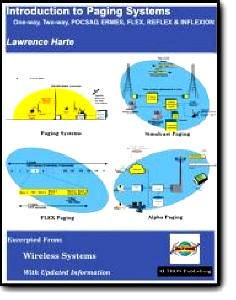 This book explains the different types of paging systems, how they operate, and changes that are occurring in the paging industry. Traditional paging services have seen a world decline of over 65% in the number of traditional paging services between 1988 to 2003. During this decline, some paging systems have experienced high-growth. These systems offered new services including two-way short messaging, data gathering (telemetry), and remote control.
You will discover that the lifecycle of paging systems is likely to continue because paging systems generally have much better and more reliable in building radio coverage, have smaller low cost devices (pagers), and the service cost can be substantially less than other systems such as cellular radio.

Paging systems use different types of radio protocols to provide paging and messages services. The early paging systems simply turned on or off a signal on a given frequency to alert the user of a specific page. Commercial paging systems often conform to industry standards. Covered are the key paging industry standards including as POCSAG, ERMES, FLEX, and REFLEX to standardize equipment and services. This has resulted in a dramatic reduction in equipment and usage costs for the customer and the availability of amazing new devices.

The paging industry continues to evolve with innovative technologies and services that provide for new communication applications. This book covers some of the near-term changes that will affect the paging industry. Some of the most important topics featured are: