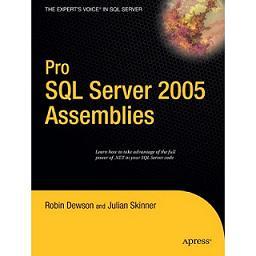 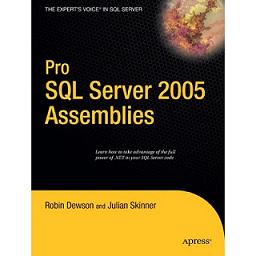 Pro SQL Server 2005 Assemblies provides a detailed and example-driven tutorial on how to build and use .NET assemblies. The authors focus on building assemblies in C#, but also provide the equivalent VB .NET code in the supplied code download.

Assemblies are not a complete replacement for T-SQL stored procedures and triggers; rather, they're enhancements, to be used at the right place and right time. This book examines the ins and outs of assemblies–when they should and should not be used, what you can do with them, and how you can get the most out of them.

About the Author
Robin Dewson has been hooked on programming ever since he bought his first computer, a Sinclair ZX80, in 1980. He has been working with SQL Server since version 6.5 and Visual Basic since version 5. Robin is a consultant mainly in the city of London, where he has been for nearly eight years. He also has been developing a rugby-related website as well as maintaining his own site at www.fat-belly.com. Julian Skinner studied Germanic etymology to PhD level before becoming a technical editor, first at Wrox Press, then at Apress. Recently he has focusing on development and writing in Microsoft technologies and, in particular, on C# and the .NET Framework. He is co-author of Professional ADO.NET, Professional ASP Data Access, and A Programmer's Guide to SQL.