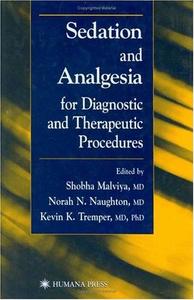 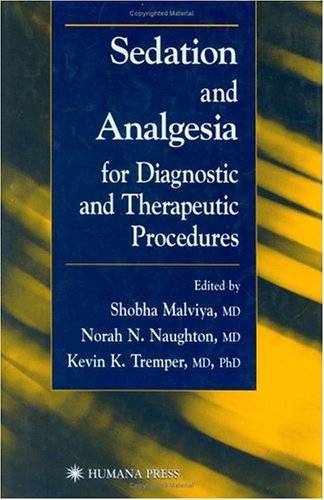 Humana Press | ISBN 0896038637 | 2001 Year | PDF | 2,6 Mb | 310 Pages
Given the recent attempts by the Academy of Medicine to promote safer sedation, I had hoped that Sedation and Analgesia for Diagnostic and Therapeutic Procedures would contain helpful advice and guidance. I was greatly disappointed. With 18 of the 19 contributors coming from the USA, the book is clearly written for an American audience. All of the specific guidelines, rules and regulations are American, with no discussion of policies and practices in any other countries. While the basic principles may be similar, confusion is likely, as what is ‘mandatory’ in one place may only be ‘recommended’ elsewhere and vice versa. Predictably, American spellings are used, but alternative drug names used in Europe are not even acknowledged, which could be confusing and possibly dangerous.

Much of the book seems to lack focus. From the title, I would not expect sedation in the intensive care unit or general anaesthesia to be covered, except in passing. Unfortunately, several chapters devote many pages to these issues. That others do not implies a lack of editorial guidance and control. Material is often inappropriate for the target audience, claimed to range from investigators and physicians to nurses and administrators. For example, Chapter 5 Table 1 lists Malampatti class III as a risk factor that should trigger discussion with an anaesthetist. While I do not dispute this sage advice, the authors really should have defined the Malampatti classification, which I doubt would be known to anyone other than an anaesthetist. Practical tables and figures have not been used as consistently and effectively as the editors had hoped. The index also seems rather basic. Neither intranasal midazolam nor the aforementioned Malampatti classification are listed, despite several mentions in the text. The interaction of midazolam with opioids is indexed to only one of its multiple citations.

Chapter 1 is, in my opinion, the weakest, being confusing and unhelpful. It begins by highlighting differences between sedation and sleep, but then tries to explain both by way of common pathways. The authors use the bispectral index score (BIS) in support of their hypothesis, yet fail to mention that nitrous oxide can produce unconsciousness at normal BIS levels. Examples are often given for specific drugs, with no mention of how other members of the same class behave. A section on the pivotal role of GABA fails to mention propofol. There are also some errors, for example, nausea and vomiting are said to be ‘positively correlated with sedation level’, citing a study which actually showed nausea to be more common at light levels of sedation, probably because these less sedated patients also received more opioid analgesia.

Chapters 2 and 3 discuss American practice guidelines for paediatric and adult sedation, respectively. There is considerable overlap, but the second chapter is more useful, since it outlines various principles that would be helpful to anyone developing their own guidelines, and it contains valuable information on complication rates and monitoring. Chapter 4 provides specific advice for many paediatric procedures, but is a little disjointed. I would have liked a summary or table suggesting which types of procedure should involve an anaesthetist and which can be managed by other care providers, especially in the subsection on cardiology. Table 2 simply lists interventional radiology procedures; far more useful would have been to combine this with the subsequent text to suggest the likely level of sedation required for each procedure in tabular form. Table 3 could adopt a similar approach. Chapter 5, sedation by site and procedure, states that a comprehensive review of the use of various sedatives, analgesics and other adjuvants in bronchoscopy ‘is beyond the scope of this section’. I disagree and can see no better place for such a discussion, especially in a book aimed at a target audience which ‘spans multiple disciplines’.

Chapter 6 discusses the pharmacology of sedative agents, but three-quarters is devoted to general anaesthetic agents and often inappropriately deals with general anaesthesia or sedation in intensive care. Much of the basic pharmacology of these drugs will already be well-known to anaesthetists and, as much of the remainder of the book stresses, these drugs should not be used for sedation by other practitioners. Discussion of the various pharmaceutical preparations of propofol is again relevant only to the USA, while alternative formulations of etomidate (available in parts of Europe) receive no mention. The ‘dosage guidelines’ given in Table 5 would induce general anaesthesia in a great many cases, again suggesting a lack of focus. The following chapter discusses opioid pharmacology in considerable detail, but, bizarrely, this is confined to paediatric practice, in contrast to the more general handling of sedatives in the preceding text. Morphine is described as ‘the gold standard against which all other opioids are compared’, yet Table 1 normalizes all doses against meperidine (pethidine). The section on suggested morphine dose seems more relevant to postoperative or chronic pain, rather than to analgesia for diagnostic and therapeutic procedures. The description of oral transmucosal fentanyl refers only to its use for premedication. Chapter 8 briefly discusses monitoring standards (again, all American), before launching into a description of several monitoring devices. The detail is considerably more than I feel much of the readership will require. Unfortunately, some important ‘nuggets’, for example that pulse oximeters may be fooled into displaying saturations of around 80% by a popular American topical throat spray, are buried in the middle of some fairly advanced physics and may well be missed.

Chapter 9 reviews numerous methods for measuring sedation. While comprehensive, much again relates to sedation in the intensive care unit or general anaesthesia. What is particularly lacking is a simple summary suggesting which of the available measures are the most reliable during routine (sedation) practice. The following chapter provides a nursing perspective on the care of the sedated patient. Although there is much repetition from elsewhere, the language and style may make this section more accessible to those readers who are not anaesthetists. The short chapter on recovery and transport of sedated patients is good, although I would hope that better intraoperative management would reduce the number of patients who are still excessively sedated at the end of the procedure. The final chapter concerns quality assurance and continued improvement. Although the examples are again all American, there is a lot of information on the basic principles of quality management, including developing quality indicators and benchmarking. As a result, this chapter may be one of the most useful in the whole book.

This book does provide an interesting insight into American medical practice, where cost is often the driving factor. Some of the ‘turf wars’ between competing groups with vested interests will seem familiar. Despite the profusion of official guidelines in the USA, there is clearly a need for greater agreement and standardization, best illustrated by scary tales (p. 116) of cardiologists administering general anaesthesia for cardioversion, admittedly after ‘on-the-job training’.