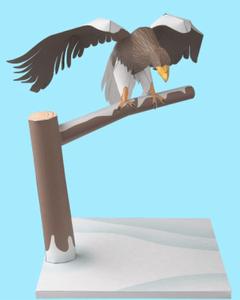 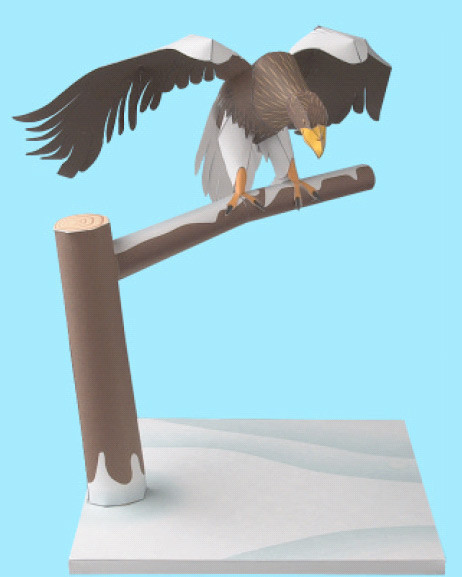 
The Steller’s sea eagle is a bird of prey which belongs to the family Accipitridae. It is characterized by dark brown plumage with a white wedge-shaped tail and an orange, very deep, strongly arched beak. The wingspan of this largest bird of prey seen in Japan can exceed two meters. It is because of these powerful wings that the beautiful predator can easily fly while carrying prey weighing up to half of their own weight. Riding an ascending air current, it can also fly for a long time without flapping its wings.

The diet consists principally of large fresh-water fish, such as salmon and trout. With eyesight that is said to be more than six times better than that of humans, the sea eagles circle in the air searching prey, and then dive into the water when they find one. They also feed on waterfowls, young deer, rabbits, and carcasses of seals. Steller’s sea eagles are monogamous and build plate-shaped nests in river valleys and along sea coasts, where the supply of fish is abundant. Clutches appear in spring, usually consisting of 1 – 3 eggs. Eggs hatch after an incubation period of about 1 month, and nestlings are covered with grayish brown feathers.

Steller’s sea eagles are primarily found within northern Russia along the lower reaches of the Amur River, the coast of the Sea of Okhotsk, the Kamchatka Peninsula, on northern Sakhalin Island. They nest and breed in the woods in the range and migrate to Hokkaido and the Tohoku area, where they overwinter. The number of eagles is on the decline due to deforestation. Japan’s Environmental Agency is cooperating with Russia to conduct studies using satellite-tracking. In the studies, transmitters are attached to eagles to track down their “migration routes” and to help conserve the species. In recent years, many eagles die from lead-poisoning by feeding on deer carcasses left behind after hunting, and measures against such death is urgently called for.

Habitat range: Primarily found within northern Russia along the lower reaches of the Amur River, the coast of the Sea of Okhotsk, the Kamchatka Peninsula, on northern Sakhalin Island. Nesting and breeding in the woods in the range, Steller’s sea eagles migrate, with the onset of winter, to Hokkaido and the Tohoku area, where they overwinter.

The Steller’s sea eagle, known in Japan as “O-washi”, is the largest bird of prey in the country and migrates between Russia and Japan each year.

Assembly instructions for the Paper Craft Model of the Steller’s sea eagle with large wings and a sharp beak, as well as a photo image of a completed model.

The beautiful, majestic-looking predator is classified as “Vulnerable (VU)” in the Red List.