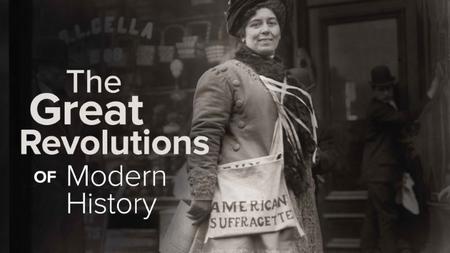 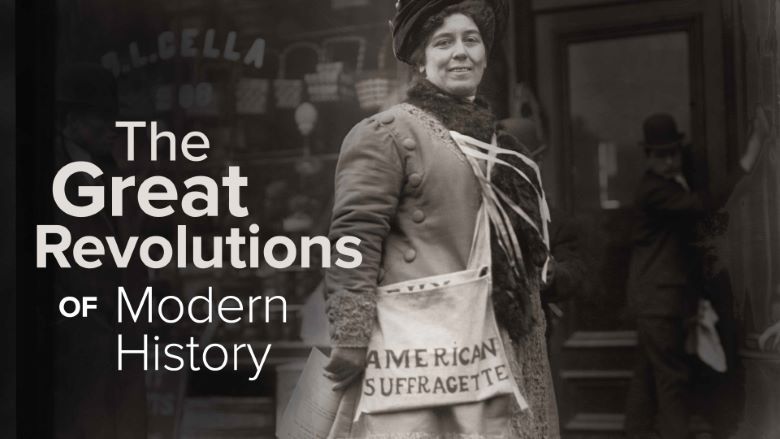 The great revolutions of the past 300 years have profoundly shaped the social, cultural, political, and military landscape of the 21st century. These epic changes tore down established orders and built new ones in their place. What drives individuals and groups to embrace revolution? At what point does a society decide to revolt? Is there such a thing as a peaceful revolution? Why have some revolutions failed while others changed the world?


Show Full Description
Delve into these questions and more in The Great Revolutions of Modern History. Taught by Professor Lynne Ann Hartnett of Villanova University, these 24 eye-opening lessons will give you new insights into the forces that have shaped the political and cultural landscape of our world. You will travel back in time and across the globe to examine some of history’s most momentous and influential political transformations. Starting with the American Revolution and the French Revolution, covering world-changing movements in China, Mexico, India, Haiti, Africa, Russia, and more, Professor Hartnett surveys the shifting tides that inspired each of these revolutions.

From religious movements to economic overhauls, you will get an insider’s view of radicals, revolutionaries, and ideological visionaries, as well as the rulers and systems they sought to overthrow. You will also consider revolutions as a distinctly modern phenomenon. Riots, rebellions, and other forms of uprisings are inextricable parts of human history, but revolutions are something different. As you will learn, revolutions systematically alter the dynamic between the state, authorities, elites, and the people—and they attempt to fundamentally transform power relationships.

We live in a precarious time in the 21st century, with uprisings constantly in the news. What you will learn in The Great Revolutions of Modern History is that revolutions often follow a similar pattern and arise from a similar source: masses of people dissatisfied with the status quo who decide they will sacrifice everything to affect fundamental change. Join Professor Hartnett for an exploration of political and cultural change—and see how our modern world was formed.

Reflect on Revolutions of Ideology

As you will discover, revolutions as political movements are often rooted in ideology, such as the idea that humans are born with inalienable rights and that democracy enables freedom, or that wealth should be redistributed to the masses, or that national cultural identity is more important than unquestioned tradition. Professor Hartnett walks you through some of the most stunning—and at times horrific—products of ideological revolution.

One of the most tragic examples is the revolution in Russia in 1917, when the masses overthrew the tsars and the old aristocracy. This uprising by the people seemed to have great promise, but it soon led to a second revolution that brought about an authoritarian state under Vladimir Lenin and the Bolsheviks before devolving into a totalitarian system ruthlessly led by Joseph Stalin. How did this transition happen? What went wrong? And what was it like to live under the Soviet totalitarian state?

Professor Hartnett then shifts her attention to another totalitarian state on the opposite end of the ideological spectrum. Nazi Germany, driven by extreme nationalism and racism, has become the emblem for everything that went wrong in the 20th century. You will trace the post-World War II trajectory of Soviet and German totalitarianism, through the cascading events that led to the fall of the Berlin Wall in 1989.

Despite these horrific examples, not every revolution leads to a totalitarian state. The revolution in Mexico, for instance, demonstrates the romance of an uprising by the people. There, the likes of Pancho Villa—made famous because of his outreach to Hollywood—show how revolutions are driven by a complex quest for freedom, and how the desires of the human heart can outmatch the powers of the state.

Along with revolutions being a distinctly modern phenomenon, they tend to follow a similar pattern, from the shaky instability of the old system to the groundswell of support from the people to the revolution itself, with its ever-present threat of violence. To show this pattern in action, Professor Hartnett walks you through some of the most important revolutions in history, including:

The Glorious Revolution: Delve into the realities of 17th-century England, a period in which the country transformed into a constitutional monarchy and which established the justification and legitimacy of future revolutions.
The American Revolution: Meet Samuel Adams and other liberty-loving rabble-rousers who overthrew the most powerful empire in the world to overcome the tyranny of taxation without representation.
The French Revolution: Reflect on the spirit of liberty, equality, and fraternity, which inspired the French masses to take on the aristocracy. Although the revolution led to a time of terror, the spirit of freedom and unity binds the people of France today.
The Cuban Revolution: Consider the geopolitical elements of revolution as you examine one of the most captivating transformations in the 20th century. See how Fidel Castro and Che Guevara took on capitalist hegemony.
Gandhi’s Non-Violent Revolution: Not every revolution required explicit violence. Reflect on the tactics of non-violence that Gandhi used to defeat the British Raj—a tactic that would inspire future revolutionaries, including Martin Luther King Jr.

Revolutions are about people, and culture is often upstream from politics. Therefore, many revolutions are driven by culture—and some revolutions work within a political system even as an emerging culture usurps the previous culture. For instance, consider:

The Civil Rights Movement: The United States was founded on ideals of freedom, but until the civil rights legislation of the 1960s, not everyone enjoyed the same rights. As you explore the push for rights for African Americans, you will reflect on the broader cultural changes wrought during the 1960s.
The Women’s Movement and the Right to Vote: The notion that “all men are created equal” linguistically left out half the population. As you will see time and again in this course, the promise of America is in the way people are able to expand the notion of freedom. Trace the push for rights for women from the influence of the powerful British movement for suffrage to Seneca Falls and, eventually, the 19th Amendment in the US.
The Televised Revolution: Mass movements require propaganda, and there is no greater propaganda than the visual persuasion of television. Visuals spark something in our brains that drive action; so, learn about the cultural medium of television and its impact on revolutions in the late 20th century.

The fascinating thing about this course is that, no matter how many systems are overthrown or how fraught a particular moment can be, a certain aspect of humanity remains constant. People want freedom, opportunity, justice, and they are willing to fight for these values, even if it costs them their lives. The Great Revolutions of Modern History is a masterful presentation of the human spirit in search of a better way of life. 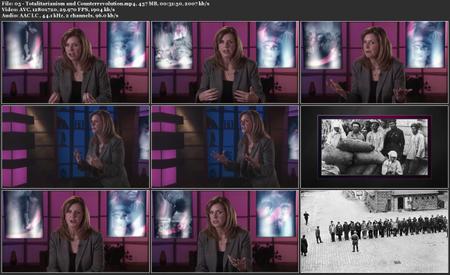 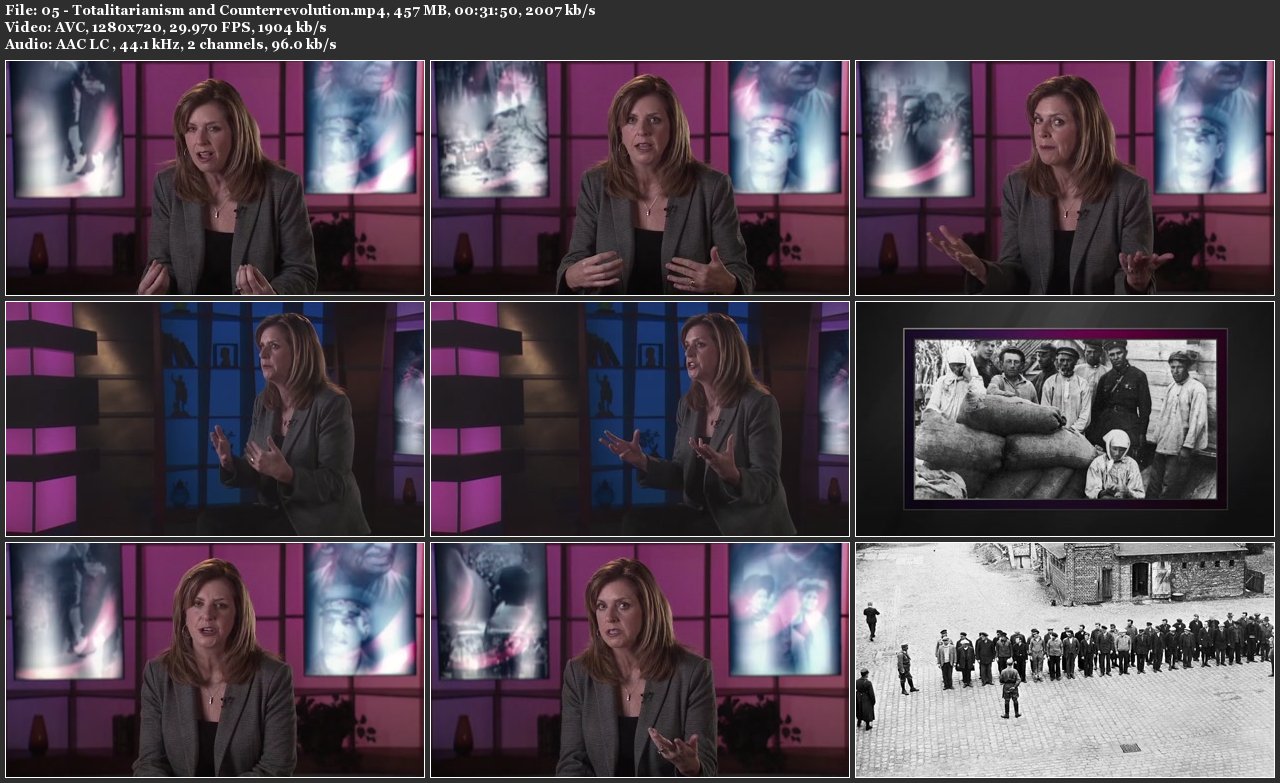