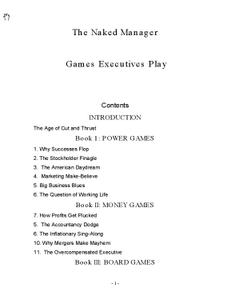 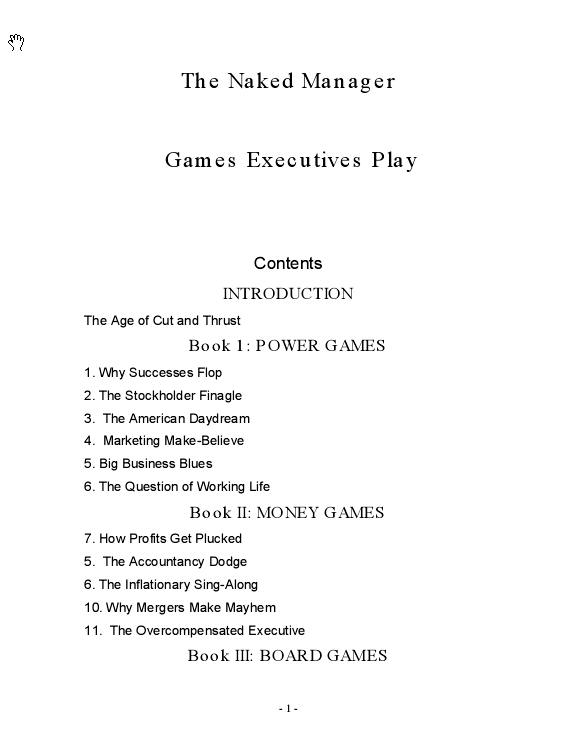 This book is dedicated to all those executives who did the right thing for the wrong reason, and were acclaimed as geniuses and heroes; and to all those who did (he wrong thing for the right, the wrong, or no reason at all and still hold their overpaid jobs. Maybe there are less of the latter around than there used to be, though. Maybe there are more, many more, managements that actually do the right thing for I fie right reason, Deep recession and foreign competition have wonderfully concentrated the managerial mind—and wonderfully concentrated many a business on its roil business, as described in these pages, which is to manage the affairs of the corporation so that everybody involved (employees, stockholders, customers, communities) has good cause to be profoundly thankful for management's work. In the process of concentration, too, more and more managements have decried the nonsense I describe; have thrown the rubbish outthe window; and have set out, often with stunning and sudden success, not to do likewise—to make a break with the over managed, underproductive past. But nothing exceeds like excess. Just as the conglomerate cons and the merger mania of the 1960s were the product, the oil slick, if you will, of the Kennedy-Johnson boom, so the Reagan renaissance generated, and is still generating, a new collection of excrescences every bit as bothersome as any managerial nudity of the past. Actually, the faults and the dangers are always the same. The dialogue and the actors may change, but every time the business cycle peaks, it's basically the same stupid plot- Only think back to that 1dedication to 'those who still hold overpaid jobs' they don't deserve. Well, maybe more managers deserve their positions, but Americans are now, and tightly so, beginning to question whether these executives deserve their pay, or rather overpay. Men who have never laid their own fortunes on the entrepreneurial line are making themselves multimillionaires, at the stockholders' expense, with no more trouble than it takes to arrange a bonus deal or stock-option scheme. If as much ingenuity had been spent on schemes for getting more productive collaboration From the rest of the work force, maybe the managerial elite would have presided over fewer losses of jobs and markets.......