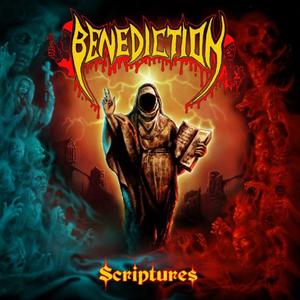 After more than 30 years in the business and 12 years after their last album "Killing Music", BENEDICTION are now back with one of their best releases and play once again in the Death Metal Champions League.The new album "Scriptures" sounds 100% like BENEDICTION: they blend death metal with a "fuck-off punk rock attitude", heavy metal riffing and a groove that hardly any other band can perform like this. Dave Ingram's "signature-growls" and powerful lyrics enhance the tonal framework so that you can hear after a few notes that you are listening to BENEDICTION. As usual the tracks vary from slow and heavy to fast and intense, from shorter "in your face" numbers to epic masterpieces.