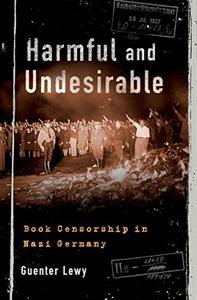 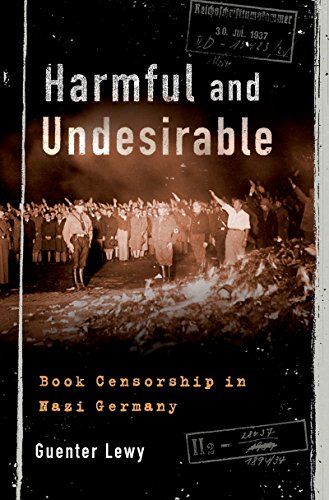 Harmful and Undesirable: Book Censorship in Nazi Germany by Guenter Lewy
English | July 14, 2016 | ISBN: 0190275286, 0197524281 | EPUB | 280 pages | 5.3 MB
Like every totalitarian regime, Nazi Germany tried to control intellectual freedom by censoring books. Between 1933 and 1945, the Hitler regime orchestrated a massive campaign to take control of all forms of communication. In 1933, there were 90 book burnings in 70 German cities. Indeed, Werner Schlegel, an official in the Ministry of Propaganda, called the book burnings "a symbol of the revolution." In later years, the regime used less violent means of domination. It pillaged bookstores and libraries and prosecuted uncooperative publishers and dissident authors.

In Harmful and Undesirable, Guenter Lewy analyzes the various strategies that the Nazis employed to enact censorship and the government officials who led the attack on a free intellectual life, including Martin Bormann, Philipp Bouhler, Joseph Goebbels, and Alfred Rosenberg. The Propaganda Ministry played a leading role in the censorship campaign, supported by an array of organizations at both the state and local levels. Because of the many overlapping jurisdictions and organizations, censorship was disorderly and erratic.

Beyond the implementation of censorship, Lewy describes the plight of authors, publishers, and bookstores who clashed with the Nazi regime. Some authors were imprisoned. Others, such as Gottfried Benn, Werner Bergengruen, Gerhart Hauptmann, Ernst Jünger, Jochen Klepper, and Ernst Wiechert, became controversial "inner emigrants" who chose to remain in Germany. Some of them criticized the Nazi regime through allegories and parables. Ultimately, Lewy paints a fascinating portrait of intellectual life under the Nazi dictatorship, detailing the dismal fate of those who were caught in the wheels
of censorship.