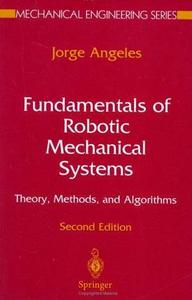 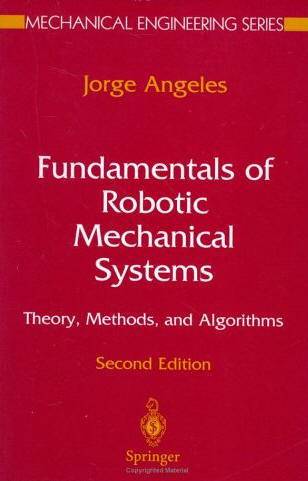 Fundamentals of Robotic Mechanical Systems by Jorge Angeles
Publisher: Springer; 2 edition (October 16, 2002) | ISBN-10: 038795368X | PDF | 10 Mb | 536 pages
Modern robotics dates from the late 1960s, when progress in the development of microprocessors made possible the computer control of a multiaxial manipulator. Since then, robotics has evolved to connect with many branches of science and engineering, and to encompass such diverse fields as computer vision, artificial intelligence, and speech recognition. This book deals with robots-such as remote manipulators, multifingered hands, walking machines, flight simulators, and machine tools-that rely on mechanical systems to perform their tasks. It aims to establish the foundations on which the design, control and implementation of the underlying mechanical systems are based. The treatment assumes familiarity with some calculus, linear algebra, and elementary mechanics; however, the elements of rigid-body mechanics and of linear transformations are reviewed in the first chapters, making the presentation self-contained. An extensive set of exercises is included. Topics covered include: kinematics and dynamics of serial manipulators with decoupled architectures; trajectory planning; determination of the angular velocity and angular acceleration of a rigid body from point data; inverse and direct kinematics manipulators; dynamics of general parallel manipulators of the platform type; and the kinematics and dynamics of rolling robots. Since the publication of the previous edition there have been numerous advances in both the applications of robotics (including in laprascopy, haptics, manufacturing, and most notably space exploration) as well as in the theoretical aspects (for example, the proof that Husty's 40th-degree polynomial is indeed minimal - mentioned as an open question in the previous edition). This new edition has been revised and updated throughout to include these new