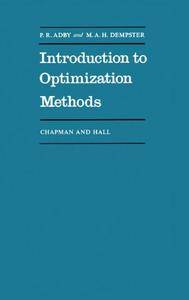 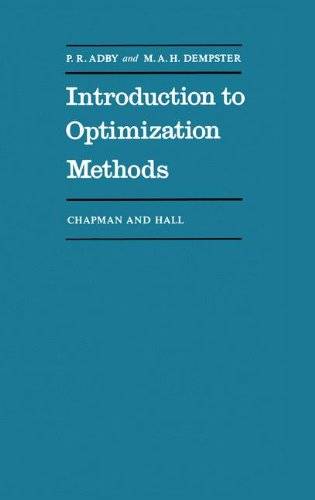 Introduction to Optimization Methods (Chapman and Hall Mathematics Series) by P. Adby
English | 1974 | ISBN: 0412110407 | 204 Pages | DJVU | 2.39 MB
During the last decade the techniques of non-linear optim­ ization have emerged as an important subject for study and research. The increasingly widespread application of optim­ ization has been stimulated by the availability of digital computers, and the necessity of using them in the investigation of large systems. This book is an introduction to non-linear methods of optimization and is suitable for undergraduate and post­ graduate courses in mathematics, the physical and social sciences, and engineering. The first half of the book covers the basic optimization techniques including linear search methods, steepest descent, least squares, and the Newton-Raphson method. These are described in detail, with worked numerical examples, since they form the basis from which advanced methods are derived. Since 1965 advanced methods of unconstrained and constrained optimization have been developed to utilise the computational power of the digital computer. The second half of the book describes fully important algorithms in current use such as variable metric methods for unconstrained problems and penalty function methods for constrained problems. Recent work, much of which has not yet been widely applied, is reviewed and compared with currently popular techniques under a few generic main headings. vi PREFACE Chapter I describes the optimization problem in mathemat­ ical form and defines the terminology used in the remainder of the book. Chapter 2 is concerned with single variable optimization. The main algorithms of both search and approximation methods are developed in detail since they are an essential part of many multi-variable methods.
MORE BOOKS | MY RSS