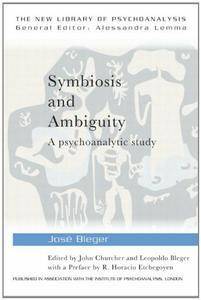 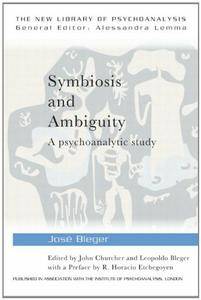 Bleger's thesis is that starting from primitive undifferentiation, prior to the paranoid-schizoid position described by Klein, autism and symbiosis co-exist as narcissistic relations in a syncretic ‘agglutinated’ nucleus. In symbiosis part of the mind is deposited in an external person or situation; in autism it is deposited in the patient's own mind or body. The nucleus is ambiguous and persists in adults as the psychotic part of the personality.

Symbiosis tends to immobilise the analytic process, so the analyst must mobilise, fragment and discriminate the agglutinated nucleus, whose ambiguity tends to ‘blunt’ persecutory situations. The psychoanalytic setting functions as a silent refuge for the psychotic part of the personality, where it creates a ‘phantom world’. At some point, therefore, the setting itself has to be analysed and the analytic relationship de-symbiotised, as Bleger observes in a celebrated chapter on the setting.

José Bleger’s work demonstrates the need to analyse early narcissistic object relations as they arise clinically, especially in the setting. More widely, he regards undifferentiation and participation as operating throughout life: in groups, institutions, and society as a whole.