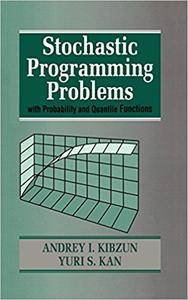 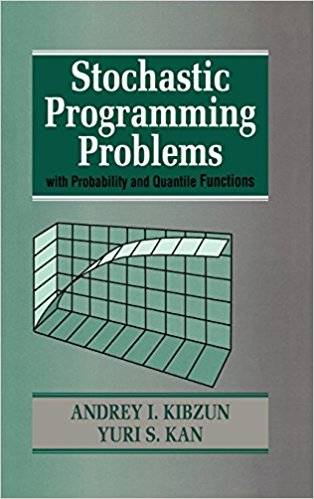 Andrey I. Kibzun,‎ Yuri S. Kan, "Stochastic Programming Problems with Probability and Quantile Functions"
1996 | ISBN-10: 0471958158 | 316 pages | PDF | 4 MB
The concept of a system as an entity in its own right has emerged with increasing force in the past few decades in, for example, the areas of electrical and control engineering, economics, ecology, urban structures, automaton theory, operational research and industry. The more definite concept of a large-scale system is implicit in these applications, but is particularly evident in fields such as the study of communication networks, computer networks and neural networks. The Wiley-Interscience Series in Systems and Optimization has been established to serve the needs of researchers in these rapidly developing fields. It is intended for works concerned with developments in quantitative systems theory, applications of such theory in areas of interest, or associated methodology. Of related interest Stochastic Programming Peter Kall, University of Zurich, Switzerland and Stein W. Wallace, University of Trondheim, Norway Stochastic Programming is the first textbook to provide a thorough and self-contained introduction to the subject. Carefully written to cover all necessary background material from both linear and non-linear programming, as well as probability theory, the book draws together the methods and techniques previously described in disparate sources. After introducing the terms and modelling issues when randomness is introduced in a deterministic mathematical programming model, the authors cover decision trees and dynamic programming, recourse problems, probabilistic constraints, preprocessing and network problems. Exercises are provided at the end of each chapter. Throughout, the emphasis is on the appropriate use of the techniques, rather than on the underlying mathematical proofs and theories, making the book ideal for researchers and students in mathematical programming and operations research who wish to develop their skills in stochastic programming.