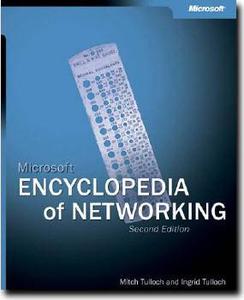 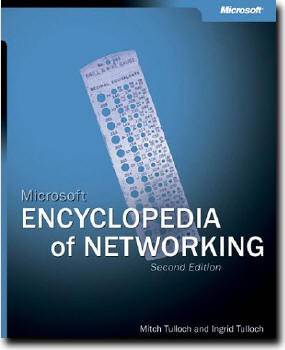 Microsoft Encyclopedia of Networking, Second Edition by Mitch Tulloch, Ingrid Tulloch
Publisher: Microsoft Press; 2nd Bk&Cdr edition (April 24, 2002) | ISBN: 0735613788 | CHM | 14 Mb | 1376 pages
The Microsoft Encyclopedia of Networking has a great deal to offer its readers–it's thoroughly researched, well written, and carefully laid out. A more apt title would have been The Encyclopedia of Microsoft Networking, however, since Windows NT, Windows 2000, and additional Microsoft networking solutions are emphasized at the expense of other popular and robust technologies. If you run a Windows shop or just want a reference on hand while you prepare for a Microsoft networking certification test, you'll be pleased by the contents of this book.
Author Mitch Tulloch has done a super job of defining (and, more importantly, explaining) hundreds of terms involving connecting computers to one another, sending signals across those connections, and performing useful work (such as database queries and electronic commerce transactions) with those signals. Entries tend to be long and thorough, often including examples or careful conceptual walk-throughs. The design team that organized this book deserves high praise too, because there are so many ways to find terms that are of interest to readers. (All the terms appear in a table of contents and an index, as well as in alphabetical order in the body of the encyclopedia.) There is also plenty of cross-referencing among terms.
The prime weakness in this book isn't necessarily that it favors Microsoft products, but that it's sometimes actively hostile to competing technologies. Linux is defined as suffering from corporate "reluctance to use free software … because there is no single company responsible for its development and support," making it suitable only for students who want to learn the Unix operating system. The first statement is a standard Microsoft argument against the adoption of Linux, although it contains some truth. The second statement reflects an error of omission: Linux is suited to such students but also to many other kinds of users. The book, not surprisingly, also lacks an entry for the Apache Web server. So if you're interested mainly in Microsoft products and don't care about these matters, this is a great book. –David Wall
Topics covered: Computer networking, particularly as implemented under Microsoft operating systems, including Windows 9x, Windows NT 4, and Windows 2000. Physical media, protocols, applications, and whole business solutions that have to do with networking are explained in an alphabetically organized series of entries.
–This text refers to an out of print or unavailable edition of this title.