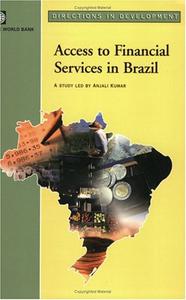 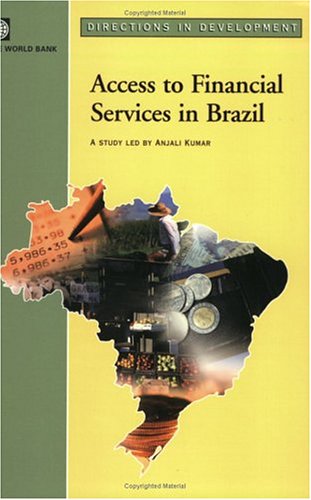 Anjali Kumar, "Access to Financial Services in Brazil"
English | 2004 | ISBN: 0821357166 | PDF | pages: 654 | 4.6 mb
There has been a growing awareness worldwide that financial exclusion reduces the potential welfare of individuals and the productivity of enterprises in an economy. This study focuses on the delivery of financial services to one of the world's most important emerging financial markets–Brazil.
Despite concerns regarding diminishing bank numbers over the last decade, there is no evidence of a trend decline in access to bank services in Brazil. Comparing Brazil with other countries at similar levels of development, Brazil is not underbanked. Yet the absolute numbers of the financially excluded are large and disparities in financial access can be at least as significant between neighborhoods within a city, as between regions of the country.
Access to Financial Services in Brazil emphasizes the role of financial infrastructure. The contribution of non-banks to access so far has been based to some degree upon regulatory arbitrage opportunities with the banking system, and they have suffered from varying degrees of lack of legal clarity. Credit to small borrowers is also impeded by difficulties in loan recovery, due partly to 'judicial activism,' and also to difficulties in the use of collateral. Further improvements in credit registries and credit reporting can greatly ease lending to small borrowers with limited credit history.
Finally, the macroeconomic environment has a profound influence on overall access. The government's large borrowing needs impact negatively upon private credit and the high taxation of the financial system is another deterrent. Nevertheless, there is a role for more proactive government policies toward access at a micro level through the creation of a more supportive enabling environment in terms of regulation, monitoring, and disclosure and selective support.