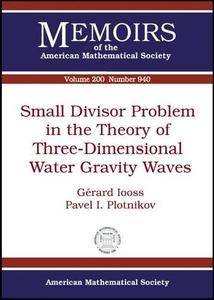 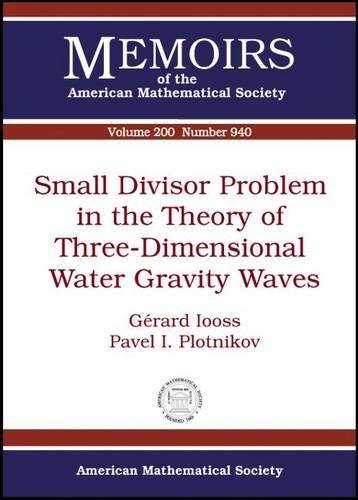 Small Divisor Problem in the Theory of Three-dimensional Water Gravity Waves (Memoirs of the American Mathematical Society) by Gerard Iooss
English | 2009 | ISBN: 0821843826 | 128 Pages | PDF | 752.65 KB
The authors consider doubly-periodic travelling waves at the surface of an infinitely deep perfect fluid, only subjected to gravity g and resulting from the nonlinear interaction of two simply periodic traveling waves making an angle 2[theta] between them. Denoting by [mu] = gL/c2 the dimensionless bifurcation parameter (L is the wave length along the direction of the travelling wave and c is the velocity of the wave), bifurcation occurs for [mu] = cos[theta]. For non-resonant cases, we first give a large family of formal three-dimensional gravity travelling waves, in the form of an expansion in powers of the amplitudes of two basic travelling waves. 'Diamond waves' are a particular case of such waves, when they are symmetric with respect to the direction of propagation. The main object of the paper is the proof of existence of such symmetric waves having the above mentioned asymptotic expansion. Due to the occurence of small divisors, the main difficulty is the inversion of the linearized operator at a non trivial point, for applying the Nash Moser theorem. This operator is the sum of a second order differentiation along a certain direction, and an integro-differential operator of first order, both depending periodically of coordinates. It is shown that for almost all angles [theta], the 3-dimensional travelling waves bifurcate for a set of 'good' values of the bifurcation parameter having asymptotically a full measure near the bifurcation curve in the parameter plane ([theta], [mu]).
MORE BOOKS | MY RSS