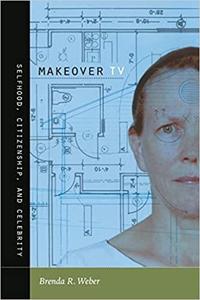 Makeover TV: Selfhood, Citizenship, and Celebrity (Console-ing Passions) by Duke University Press Books
English | November 20, 2009 | ISBN: 0822345684 | 344 pages | AZW3 | 1.77 Mb
In 2004, roughly 25 makeover-themed reality shows aired on U.S. television. By 2009, there were more than 250, from What Not to Wear and The Biggest Loser to Dog Whisperer and Pimp My Ride. In Makeover TV, Brenda R. Weber argues that whether depicting transformations of bodies, trucks, finances, relationships, kids, or homes, makeover shows posit a self achievable only in the transition from the “Before-body”—the overweight figure, the decrepit jalopy, the cluttered home—to the “After-body,” one filled with confidence, coded with celebrity, and imbued with a renewed faith in the powers of meritocracy. The rationales and tactics invoked to achieve the After-body vary widely, from the patriotic to the market-based, and from talk therapy to feminist empowerment. The genre is unified by its contradictions: to uncover your “true self,” you must be reinvented; to be empowered, you must surrender to experts; to be special, you must look and act like everyone else.
Based on her analysis of more than 2,500 hours of makeover TV, Weber argues that the much-desired After-body speaks to and makes legible broader cultural narratives about selfhood, citizenship, celebrity, and Americanness. Although makeovers are directed at both male and female viewers, their gendered logic requires that feminized subjects submit to the controlling expertise wielded by authorities. The genre does not tolerate ambiguity. Conventional (middle-class, white, ethnically anonymous, heterosexual) femininity is the goal of makeovers for women. When subjects are male, makeovers often compensate for perceived challenges to masculine independence by offering men narrative options for resistance or control. Foregoing a binary model of power and subjugation, Weber provides an account of makeover television that is as appreciative as it is critical. She reveals the makeover show as a rich and complicated text that expresses cultural desires and fears through narratives of selfhood.