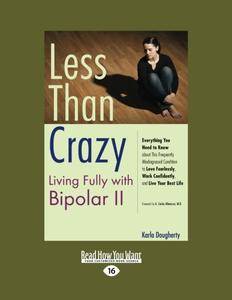 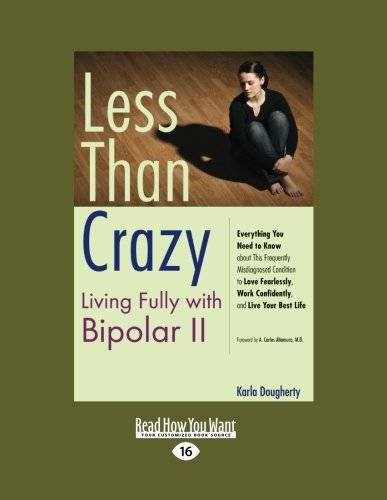 Less than Crazy: Living Fully with Bipolar II by Karla Dougherty
English | 2013 | ISBN: 1458719626 | 340 Pages | EPUB | 1.91 MB
Everything You Need to Know about This Frequently Misdiagnosed Condition to Love Fearlessly, Work Confidently, and Live Your Best Life When Karla Dougherty was diagnosed with bipolar II, her world changed. Finally, after ten years of misdiagnoses and failed treatments for anxiety and depression, she was able to step out of her ''shadow life'' and find relief. Bipolar II is a form of bipolar disorder in which a person, when in a manic cycle, is crippled by constant anxiety, irritability, and highs just intense enough to be debilitating. Instead of being the life of the party, a person with bipolar II mania might be too nervous to go to the party at all. In a depressive cycle, the sufferer might be incapacitated by guilt over an imaginary crime. More than 9 million Americans are estimated to have this chronic mood disorder. Now, in Less Than Crazy: Living Fully with Bipolar II, Dougherty both shares her story and presents an empathetic guide to recognizing and living well with this often-misunderstood condition. Whether you have already been diagnosed or suspect you may have bipolar II, Less Than Crazy can help you find the courage and conviction to reclaim your life. Includes information on: The difference between bipolar I, bipolar II, and anxiety, Getting to - and getting past - a diagnosis, Overcoming hypomania and depression, Conditions that may mimic bipolar II, How bipolar II affects children, Finding the right medications, treatments, and therapies for you
MORE BOOKS | MY RSS