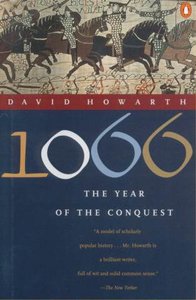 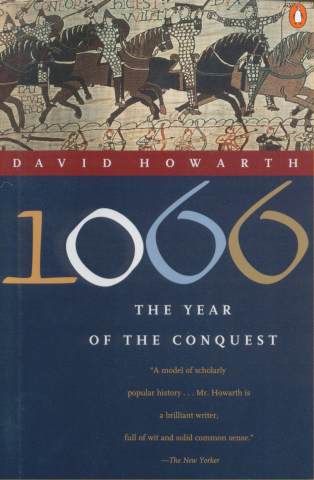 David Howarth wrote this popular history to describe the life in 1066 England from contemporary sources (Norman, English, and Scandinavian). Any historian has to decide between contradictory stories (p.8). The people of long ago lived simple lives with less knowledge, yet their thoughts and emotions were the same (p.9). Howarth wrote books about the battles of Waterloo and Trafalgar. The `Contents' list no chapter numbers. New Year's Day 1066 saw a prosperous and peaceful England. The warming phase of those centuries was accompanied by lower taxes (p.11). Villages were self-sufficient except for salt and iron. [No mention of money.] It was peaceful, but men avoided the forests at night (wolves and spirits). Independent farmers were unprotected against Viking raids or other disasters (p.13). Most had come under the protection of the armed nobility. Society was stable and ordered (p.14). The thanes could reject their Earl; even the King could be dethroned. The land was farmed as one open field, divided into strips (p.16). There is a record of those times (p.17). Howarth surmises the lives of the women and children (pp.22-24). Were they better off than their industrialized descendants (p.25)?

The death of the King would mean the election of a new King (p.29). These pages tell of the complicated Royal family connections. The "Oath of Godwin" was Norman propaganda (p.40); it never happened. Before he died King Edward the Confessor asked Harold to protect the kingdom (p.48); the witan elected Harold king (p.50). Haworth describes Harold's personality (p.55). The next chapter "Rouen" describes Normany and the violent world when Duke William was young. William had said he expected to be next in line to be King of England (p.75). Harold had made a promise (p.77). Then after Easter a comet appeared in the sky: an omen of doom (p.83). Soon an invasion of England was led by Tostig, Harold's brother; it was unsuccessful. William decided to challenge Harold in battle to claim the kingdom (p.91). Transporting thousands of knights and horses in the boats of that era was an untried experiment (p.92). Lanfranc got Papal support for William's invasion (pp.101-102). Soldiers were promised wealth if they won, heaven if they died.