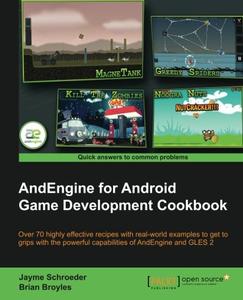 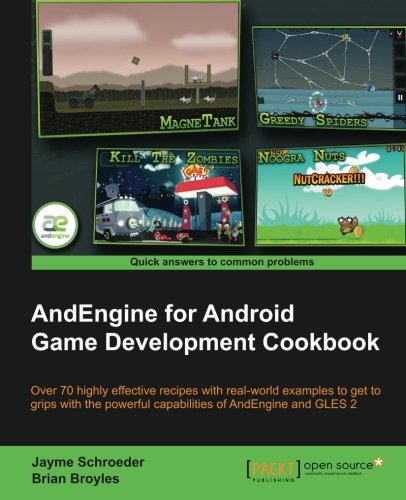 Jayme Schroeder, Brian Broyles, "AndEngine for Android Game Development Cookbook"
English | 2013 | ISBN: 184951898X | PDF | pages: 380 | 4.0 mb
AndEngine is a simple but powerful 2D game engine that’s ideal for developers who want to create mobile games. This cookbook will get you up to speed with the latest features and techniques quickly and practically.

- Step by step detailed instructions and information on a number of AndEngine functions, including illustrations and diagrams for added support and results.

- Learn all about the various aspects of AndEngine with prime and practical examples, useful for bringing your ideas to life.

- Improve the performance of past and future game projects with a collection of useful optimization tips.

- Structure your applications in a manner that provides a smooth flow from splash screen to level selection, to game play.

AndEngine is a broad 2D game engine which allows game developers, both experienced and inexperienced, to develop games for the Android platform with ease. Don't be fooled by the simplicity, though. As easy as it is to "pick up and go," AndEngine includes enough functionality to bring any type of 2D game world to life.

The "AndEngine for Android Game Development Cookbook" contains all of the necessary information and examples in order to build the games as you imagine them. The book's recipes will walk you through the various aspects of game design with AndEngine and provides detailed instructions on how to achieve some of the most desirable effects for your games.

The "AndEngine for Android Game Development Cookbook" begins with detailed information on some of the more useful structuring techniques in game design and general aspects of resource management. Continuing on, the book will begin to discuss AndEngine entities, including sprites, text, meshes, and more. Everything from positioning, to modifiers, and even tips on improving entity functionality with raw OpenGL capabilities. From here on, everything from applying physics to your game, working with multi-touch events and gestures, game optimization, and even an overview of the various AndEngine extensions will be covered.

The book has a widerange of recipes, from saving and loading game data, applying parallax backgrounds to create a seemingly 3D world, relying on touch events to zoom the game camera, taking screen-shots of the device's screen, and performance optimization using object pools. If physics-based games are more interesting to you, there's also a list of recipes ranging from controlling the world forces and calculating forces applied to bodies, creating destructible objects, and even creating rag-dolls.

Pong styled games were fun 35 years ago, but it is time to take your game to the next level with the AndEngine for Android Game Development Cookbook.

What you will learn from this book

- Make your games playable across a vast range of devices by implementing multi-touch, performance-optimizations, and accurate, screen-resolution scaling.

- Use the Box2D extension to generate realistic, physics-based gameplay and simulations.

- Take advantage of source code for a full-featured game built with AndEngine.

- Make the most of vector-based graphics with AndEngine's SVG extension.

- Control every aspect of interaction that players have with your games by managing the Android application lifecycles.