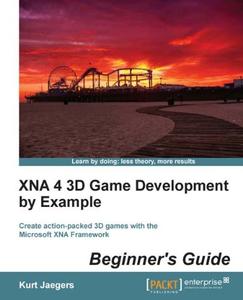 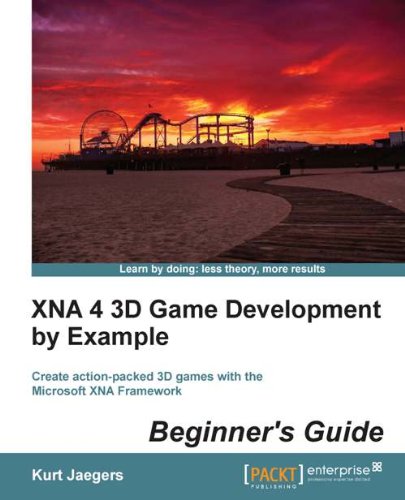 - Learn the structure of a 3D world and how to implement a variety of 3D techniques including terrain generation and 3D model rendering.

- Build three different types of 3D games step-by-step, including a first-person maze game, a battlefield tank game, and a 3D sidescrolling action game on the surface of Mars.

Move beyond the world of flat 2D-based game development and discover how to create your own exciting 3D games with Microsoft XNA 4.0. Create a 3D maze, fire shells at enemy tanks, and drive a rover on the surface of Mars while being attacked by alien saucers.

"XNA 4 3D Game Development by Example: Beginner's Guide" takes you step-by-step through the creation of three different 3D video games with Microsoft XNA 4.0. Learn by doing as you explore the worlds of 3D graphics and game design.

This book takes a step-by-step approach to building 3D games with Microsoft XNA, describing each section of code in depth and explaining the topics and concepts covered in detail.

From the basics of a 3D camera system to an introduction to writing DirectX shader code, the games in this book cover a wide variety of both 3D graphics and game design topics. Generate random mazes, load and animate 3D models, create particle-based explosions, and combine 2D and 3D techniques to build a user interface.

"XNA 4 3D Game Development by Example: Beginner's Guide" will give you the knowledge to bring your own 3D game creations to life.

What you will learn from this book

- Create 3D terrain based on a 2D height map image, adding texturing and lighting to the terrain's surface

- Build a button-based user interface overlay for your 3D game

- Build a skybox to give your worlds full 3D backgrounds

- Detect collisions between 3D objects and have your game react accordingly

This book is a step-by-step tutorial that includes complete source code for all of the games covered. It adopts an engaging style to teach all the game development concepts. Each block of code is explained, and game development concepts are diagrammed and covered in detail. Each game begins with a concept description and concludes with suggestions for expanding on the finished game.

Who this book is written for

This book is intended for readers who want to create 3D games using the XNA Framework. Basic knowledge of the C# programming language and 2D XNA concepts are helpful, but not required.