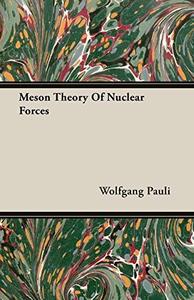 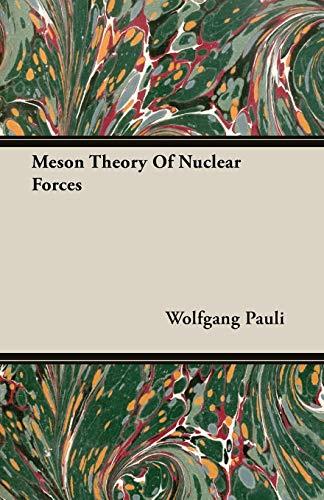 MESON THEORY OF NUCLEAR FORCES WOLFGANG PAULI THE INSTITUTE FOR ADVANCED STUDY, PRINCETON, NEW JERSEY, AND FEDERAL POLYTECHNICUM ZURICH, SWITZERLAND SECOND EDITION 1948 INTERSCIENCE PUBLISHERS, INC. NEW YORK INTERSCIENCE PUBLISHERS, LTD. LONDON Copyright, 1946, 1948, by INTERSCIENCE PUBLISHERS, INC. 215 Fourth Avenue, New York 3, N. Y. Printed in the United States of America by Mack Printing Company, Easton, Pa. First Edition, 1946 Second Edition, 1948 All rights reserved This book or any part thereof must not be reproduced in any form without per mission of the publisher in writing. This applies specifically to photostatic and microfilm reproductions. PREFACE TO THE SECOND EDITION Since the publication of the last edition some of the older experiments particularly those on angular dis tribution in proton-neutron scattering have been ren dered obsolete by more recent work. In addition, some consequences of the strong coupling theory have been clarified. In this respect, improvements have been introduced into the text. On the other hand, the provisional state of the meson theory has become still more obvious as a result of the experimental discovery of at least two kinds of mesons by C. F. Powell and G. P. S. Occhialini, and by the absence of negative meson capture by the lighter nuclei by M. Conversi, E. Pancini, and O. Piccioni. In view of the failure of all present theories in explaining these new facts, the author saw no possibility of making an essential improvement in the substance of this book. But the recent success of C. M. G. Lattes and E. Gardner in producing mesons artificially will presum ably bring forth a great change of the whole situation in the near future. Zurich, Switzerland WOLFGANG PAULI June, 1948 Preface to the First Edition The purpose of this volume is to make accessible to a larger number of readers the lectures which I gave in the autumn of 1944 at the Massachusetts Institute of Technology. Without pretending to contain any thing essentially new, they may serve to give to students and research workers a first orientation in the more recent literature on the theory of the interaction of mesons with protons and neutrons nucleons and the interactions between nucleons derived from it. Despite the imperfections of my lectures, the original notes written by Dr. J. F. Carlson and Dr. A. J. F. Siegert have been amended only slightly, to preserve the in formal character of the lectures and to emphasize the very provisional state of the problems in question, to which new experiments may in the future make im portant contributions. Special thanks are extended to Dr. S. T. Ma for reading and checking the proofs. Princeton, New Jersey WOLFGANG PAULI February, 1946 CONTENTS PREFACE v CHAPTER I 1 Various Types of Meson Fields 3 Scalar Charged Meson Field 4 Pseudoscalar Symmetric Theory 6 Vector-Field Theory 8 CHAPTER II 11 Theory of Extended Source 12 CHAPTER III 25 Scattering of Mesons 25 Magnetic Moment in the Strong Coupling Case 34 Magnetic Moment in the Weak Coupling Case . 38 CHAPTER IV 41 Quantum Theory of Scattering 41 Theory of Radiation Damping 41 Heisenbergs Observable Quantities 1 ... 46 Proof that 5 is Unitary 48 CHAPTER V 52 Theory of Neutron-Proton Scattering 52 CHAPTER VI 57 Strong Coupling Theory of the Two-Nucleon Sys tem 57 Concluding Remarks 65 APPENDIX 67 CHAPTER I The meson theory of nuclear forces has been de veloped in analogy to the theory of the Coulomb force, which arises from the interaction of charged particles with the electromagnetic field. The short range of the nuclear forces is obtained by letting the particles corre sponding to the photons have a rest mass, 1 the range of forces arising from a field of particles of rest mass x being H JLC. From experiments on scattering of neutrons by protons the range of nuclear forces is known to be 2 X 10 13 cm, which leads to a rest mass -t 200 electron masses...