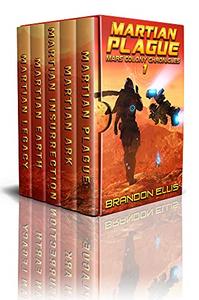 Ozzy Mack went to Mars to make money. The newly discovered ancient ruins were a gold mine for the black-market archeologist.

When aliens invade, wiping out all life on earth, Mars becomes the last bastion of humanity. The plague the aliens used on Earth is coming to Mars…

However, the human race doesn’t roll over and die. The cure might be in the Martian ruins and there’s one man on the planet who can solve the riddle.

Ozzy’s running out of time. If he can’t decipher the ancient relics his daughter will die, along with the remains of human civilization!

There is no peace as long as humanity survives.

After a devastating clash with aliens, Ozzy is ready to lay low and stay out of trouble. However, the aliens aren’t going to let him. They’re sending a fleet to bomb Mars out of existence.

The military can’t stop them.

But Ozzy refuses to give up.

When Jonas, the head of the black-market, offers him a job, his first thought is no. But Jonas has a plan to save Mars. He just needs Ozzy to find a million-year-old artifact buried in the sands. If it even exists.

But there is more to it than finding an old piece of Martian tech. Only those with the blood of ancient Martians can wield it.

Guess who that is?

With the Dunrakee fleet ready to wipe out the last vestiges of humanity, Ozzy has one chance to strike first. However, the alien weapon will kill him as well as the enemy. Can Ozzy find a way to use it without killing himself, or will he make the ultimate sacrifice?

Grab your pressure suit and set out in the sands for adventure. Buy Martian Ark and start reading today!

Bloodthirsty Aliens aren’t the only threat…

Ozzy faced an alien horde and an ancient weapon trying to kill him. He saved humanity twice and used the Ark to send the alien’s back to earth.

He’s not out of the woods yet.

While the Ark can protect Mars, it can’t stop the aliens for good, unless… he finds the second part of the weapon which will let him launch it at Earth like a missile.

A counterattack is coming, but it’s not the greatest threat to Mars. The High judge is using this time of turmoil to solidify his iron grip on Mars. He must control everything on the planet.

There’s just one problem. Only Ozzy controls the Ark.

With his own leaders trying to kill him, and the aliens ever present threat, Ozzy must find a way to navigate the minefield of politics and deception if he’s going to save humanity.

Take a stand with humanity and buy Martian Insurrection now!


And carry on to Book 4, Martian Earth, and Book 5, Martian Legacy…