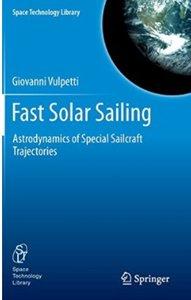 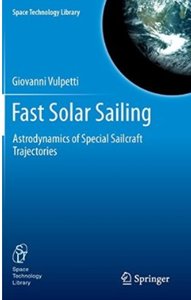 Giovanni Vulpetti, "Fast Solar Sailing: Astrodynamics of Special Sailcraft Trajectories"
2013 | ISBN: 9400747764, 9401781966 | 410 pages | EPUB | 4 MB
The range of solar sailing is very vast; it is a fully in-space means of propulsion that should allow us to accomplish various mission classes that are literally impossible using rocket propulsion, no matter if nuclear or electric. Fast and very fast solar sailings are special classes of sailcraft missions, initially developed only in the first half of the 1990s and still evolving, especially after the latest advances in nanotechnology.
This book describes how to plan, compute and optimize the trajectories of sailcraft with speeds considerably higher than 100 km/s; such sailcraft would be able to explore the outer heliosphere, the near interstellar medium and the solar gravitational lens (550-800 astronomical units) in times significantly shorter than the span of an average career (~ 35 years), just to cite a few examples. The scientific interest in this type of exploration is huge.