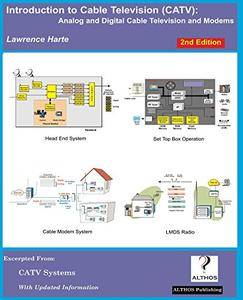 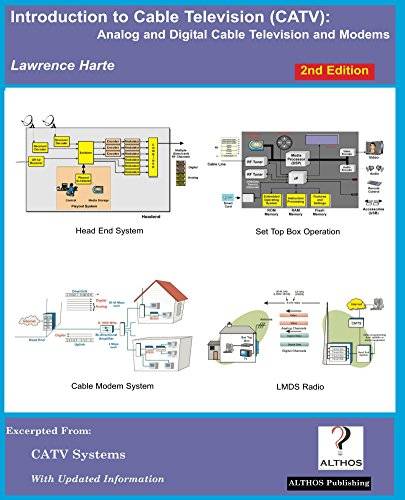 Introduction to Cable Television (CATV) 2nd Edition: Analog and Digital Television and Modems by Lawrence Harte
English | 17 Mar. 2017 | ASIN: B06XQ7F8CW | 104 Pages | AZW3 | 3.94 MB
This book explains the fundamentals of cable television systems, the equipment they use, what services they can offer, and how cable television fits and compares with other broadcast technologies. Cable television (CATV) is a television distribution system that uses a network of cables to deliver multiple video, data, and audio channels. This book provides an overview of cable television system technology including cable modems, digital television, high definition television (HDTV), along with how cable systems are evolving to offer advanced services such as ultra broadband and video on demand (VOD). Described are the basic parts of cable television systems including set top boxes, cable modems, distribution systems, and head end equipment. Analog and digital video technology fundamentals are provided including the different types of analog video (NTSC, PAL, and SECAM) and the key types of digital video compression (MPEG-2, MPEG-4 and VC-1). You will discover why and how cable system operators are converting some of their networks from analog to digital to give more channel capacity and to provide for broadband Internet (cable modem) services. Described are the fundamentals of the data over cable service interface specifications (DOCSIS) and what each revision of DOCSIS provides to cable system operators. Explained are the different types of subscription services and value added pay per view (PPV) services including near video on demand (NVOD), video on demand (VOD), and personal video recorders (PVRs). You will learn how cable systems can upgraded to offer telephone services and why cable operators are transitioning from proprietary telephone systems to industry standard voice over Internet protocol (VOIP) systems. MMDS and LMDS wireless cable technology is described along with how cable operators can efficiently use these wireless systems to extend the range of their cable systems. The future of cable television is discussed including advances in interactive television and addressable advertising. Some of the most important topics featured in this book are:
. Components and operation of CATV systems
. Differences between analog and digital CATV systems
. NTSC, PAL, and HDTV television signals
. Video and audio compression
. Cable modems using DOCSIS
. MPEG digital formats
. Video on demand (VOD)
. Cable telephony
. MMDS and LMDS wireless cable
. How CATV is evolving into IPTV